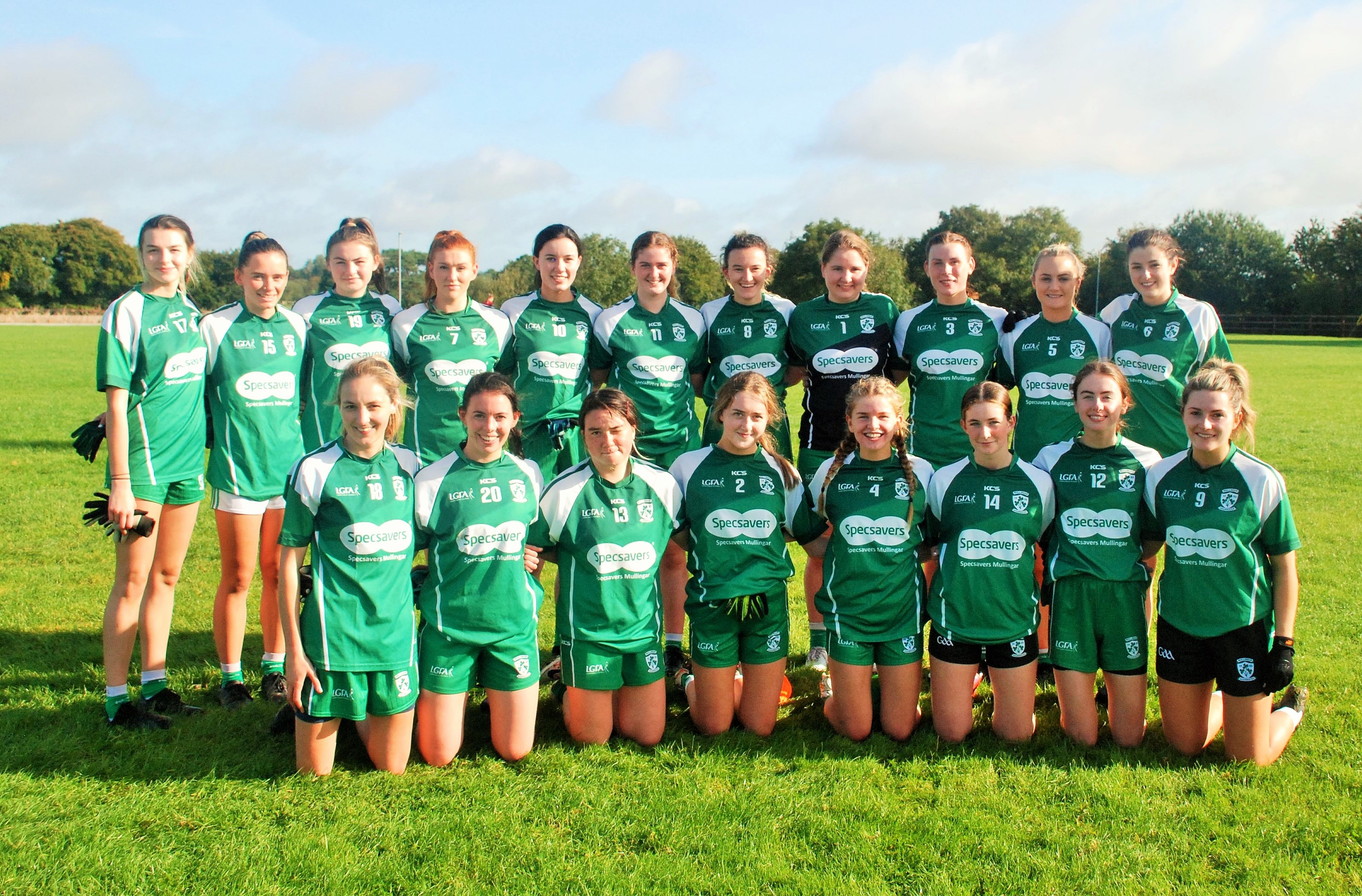 Shamrocks Ladies celebrated their first home Senior championship game with a win against Moate on Saturday. Early afternoon rain meant that the ground conditions were slippy underfoot however at throw in the sun was shining. Shamrocks had the best of the early exchanges with good team work on display. This pressure eventually led to scores with Karen Hegarty getting the opening score of the game, a fine point. Shamrocks continued to dominate possession and an accurate Karen Hegarty pass found Susanna Buckley who lobbed the Moate keeper for the opening goal of the match. Moate then scored a point which was immediately cancelled out by a further point from Susanna Buckley. Moate’s second point was again cancelled by another point from Karen Hegarty, at the first water break the home team led by 1-3 to 0-2.

Shamrocks continued their dominance in the second quarter outscoring the visitors by 5 points to one, with points from play by Susanna Buckley, Emma Morris and Karen Hegarty and two trademark fine frees slotted over by Anna Jones.

Shamrocks started the second half with a healthy 1-8 to 0-3 lead however Moate were not conceding and put sustained pressure on the Mullingar girls. The Shamrocks defenders coped admirably with repeated Moate attacks conceding only 2 points, both from frees. Just when a Moate revival threatened however, Shamrocks took control again and with a good sequence of play from the kick out getting the ball to Emma Morris who made no mistake in slotting the ball to the net. Soon after, Clara Thornton slotted over the first of what was to be a personal tally of 2-3. At this point Shamrocks took over, starting the last quarter with a commanding lead of 2-10 to 0-6, which was rapidly extended by goals from Anna Jones, two from Clara Thornton and a final goal from Karen Hegarty. When referee Ken Daly blew the final whistle, Shamrocks were winners on a scoreline of 6-15 to 0-9.

This victory secures Shamrocks Senior status for next year. Next up, Shamrocks play Milltown in a refixture of the first round which will determine which of Garrycastle, Shamrocks and Milltown reach the semi-finals of the Fairgreen Senior Championship in two weeks’ time.

This hard-earned Sunday morning victory qualified Mullingar Shamrocks for the semi-final of the Westmeath LGF Senior B Championship. Shamrocks began in spectacular fashion and goaled in their initial attack when Holly McCormack’s shot dipped under the crossbar. Teresa Connell added a point as did Jenna Kelly after a great solo run through the Kinnegad defence. Coralstown-Kinnegad responded with points from T. Coyne and Orla Fogarty but a goal from Laura Culkin and points from Holly and Ellie O’Sullivan Sexton added to the Shamrocks lead. Coralstown-Kinnegad were gradually working their way into the game and thee unanswered points before the first water break was a just reward for their efforts (2-4 to 0-6). At the end of a low scoring second quarter Mullingar Shamrocks had added two points to the lead after a great Ellie O’Sullivan Sexton score and a fine Teresa Connell effort. Ellie’s point was a great team effort coming directly from the kick-out with Casey McDermott winning possession and Holly McCormack continuing the move. A great bit of defending by Annemarie O’Reilly prevented a Coralstown-Kinnegad goal before Holly McCormack and Emer Fogarty exchanged points to bring the half-time score to 2-7 to 0-7 in favour of Mullingar Shamrocks.

Coralstown-Kinnegad dominated the third quarter and goals by Sarah Brannock and Emer Fogarty brough the sides level. The Shamrocks response was immediate, and a Holly McCormack point restored the lead; Jasmine Haugh responded with a similar score, a fine individual effort by the hard working Jasmine (2-9 to 2-7).

Coralstown-Kinnegad responded in style and a brilliant Orla Fogarty goal sent them into the lead for the first time (3-7 to 2-9). It was a short lived lead and a great strike by Holly McCormack, the best forward on view, restored the Shamrocks lead and an exciting third quarter of four great goals ended with Shamrocks leading by 3-9 to 3-7. Shamrocks outscored the home team in the final quarter and points from Jasmine, Jodi Aherne, Holly and Laura sealed what was a great team victory with all nineteen players making important contributions to the victory in which all 3-13 was scored from play bring the weekend' s total from play to 9-28.