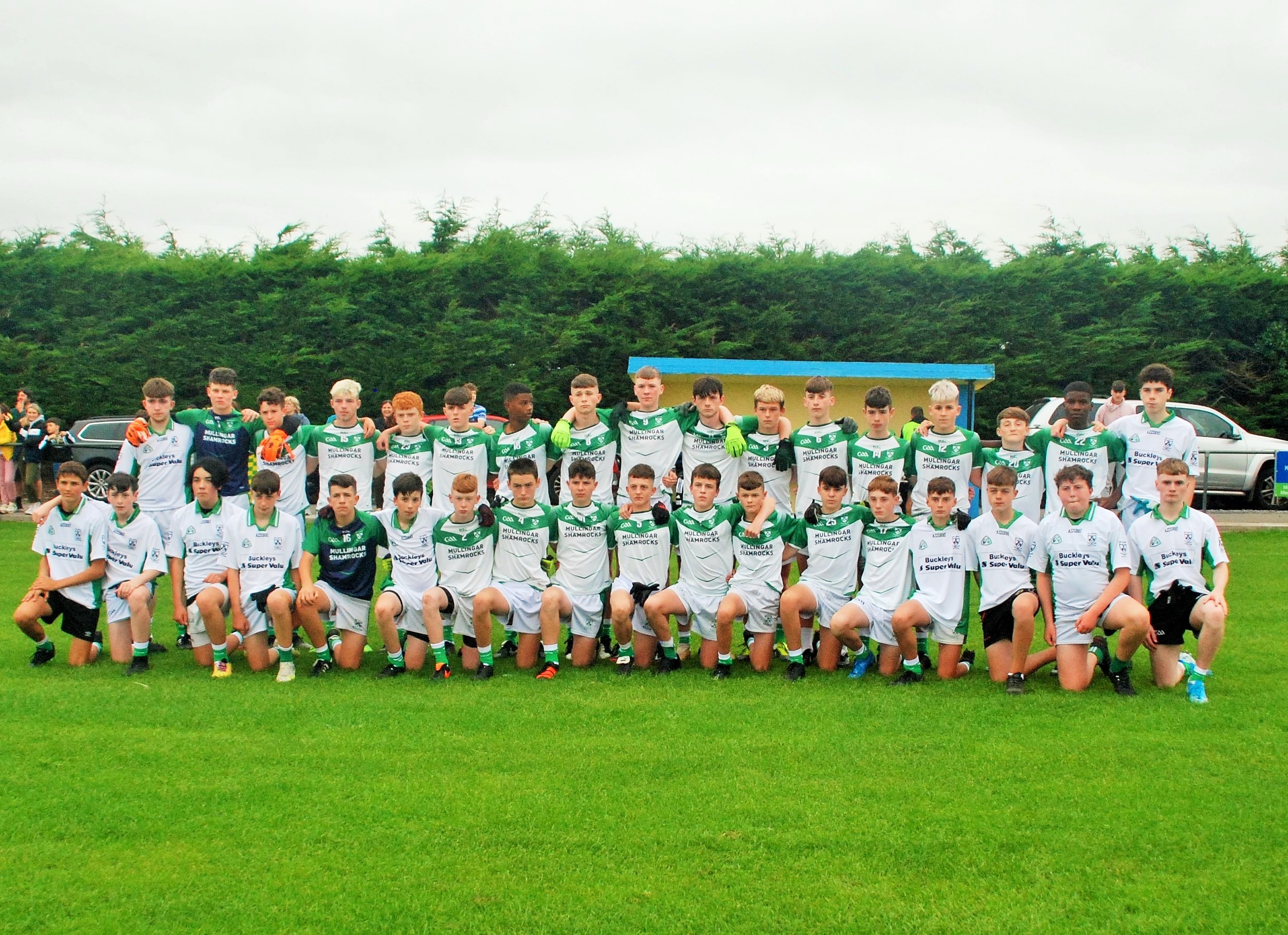 A last-minute goal by wing forward Daire O’Connor snatched victory for Tubberclaire at Ballynacargy on Friday evening when it seemed that Mullingar Shamrocks had done enough to secure the title. The Tubberclaire boys had other ideas and in their final two attacks scored 1-1 to overturn the Shamrocks 0-2 lead as the gave moved into injury time.

Shamrocks began well and Gavin Pierce pointed with a great left footed free from close to the sideline . Gavin also scored Shamrocks second score of this quarter when he sent a rocket of a shot to the Tubberclaire net to finish a great move that began with a Matthew Shaw mark and also involved contributions from Conor Heffernan and Ryan Kelly. Points by Paul Keegan (0-2), Daire O’Connor and Thomas Farrell matched the Shamrocks total and at the end of the first quarter the sides were level (1-1 to0-4).

Paul Keegan added a fifth point to the Tubberclaire total as Tubberclaire dominance was not reflected on the scoreboard as their forwards were guilty of shooting several bad wides. The move of Ryan Kelly to midfield reversed the trend and midway through the half Kelly’s long rage short dipped under the bar for a vital Shamrocks goal. A sharp turn gave Donnacha Maguire the space to shoot Shamrocks second point of the evening and establish an interval lead of 2-2 to 0-5. Tubberclaire dominated the third quarter and outscored Shamrocks 0-4 to 0-0 in great ten minutes spell. Matas saved well; Adam Glynn, Gary Brannigan and Hugh O’Sullivan-Sexton defended heroically before the excellent Callum Rigney pointed to level matters (2-3 to 0-9).

Ryan Kelly’s return to midfield was significant in the final quarter and it was now Shamrocks turn to create scoring chances. Unfortunately, the failure to convert these opportunities proved costly in the end and a return of just 0-3 in the second half was a very poor return for the number of chances created. A fine left footed point by Conor Heffernan put Shamrocks ahead; a great solo run by Callum Rigney drew a foul and a close in free which unfortunately was missed. Shamrocks continued to press and another Callum Rigney point extended Shamrocks lead as the game drifted into injury time. Kealan Connell pointed a free and in their final attack Tubberclaire scored the clinching goal when Daire O’Connor worked his way through the Shamrocks defence and shot to the net.

These Shamrocks lads have been unlucky over the years at both Under-12, Under-13 and Under-14 level but they continue to show improvement. There will be better days. There was lots of good football played, some great tackling and defending, several instances of great combination play and some fine high fielding. This was a very good Tubberclaire team, physically stronger and with some fine footballers in the key positions. Both sides have reason to be unhappy with their finishing which on the night was not in keeping with the overall quality of the football on offer.

It is important that the work of Tom Ormsby, Barry Kelly, Matthew Ledwith, Tony Sheerin and Barry Maguire is acknowledged. Tom, Tony, Matthew and the two Barry’s have worked long hours with this panel of players and their input is reflected in the way this group of lads have improved over the summer months.