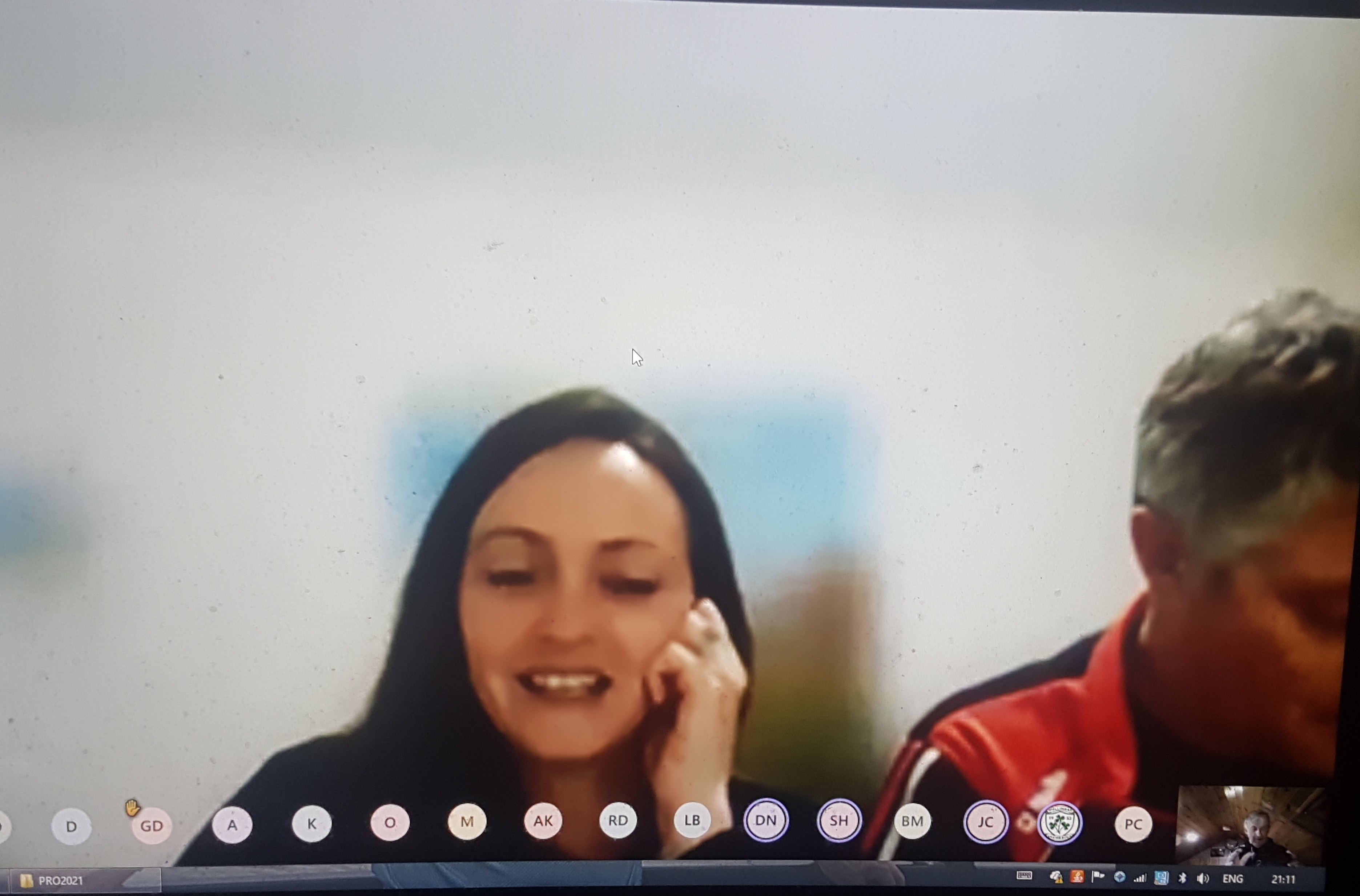 Thanks to the magic of Microsoft Teams over 40 members based in bedrooms and backrooms, attics and alcoves, kitchens and sitting rooms, men's sheds and living rooms scattered across Mullingar (Who was the furthest from town?) participated in the Mullingar Shamrocks Annual General Meeting on Friday night, 15 January 2020. It was a historic occasion and worked wonderfully well. Full marks to secretary Aidan O'Donoghue who choreographed the occasion to perfection. One member, and an executive member at that, confessed to having an alcoholic beverage during the 75 minutes of the meeting but that is alright too. It was only one and we live in extrordinary times. Secretary Aidan O'Donoghue opened the meet and in his report referenced '2020 as a testing, trying and difficult year. A year like no other and one that will livelong in the memories of Shamrocks members due to the outbreak of the Covid-19 virus'.

In line with the structures put in place in 2018, the Mullingar Shamrocks executive was comprised of dedicated subcommittees. The report to the AGM consisted of reports from these committees that 'even in these strange times, displayed the enormous amount of work, social engagement, sport, exercise, debate and participation that has taken place throughout the year' Aidan O'Donoghue stated. 'All of this is only possible with hard work and many hours of unseen work from the vast number of volunteers and member'.

Outgoing senior team manager, Ned Moore spoke of how privileged he was to 'to have managed his club and to have won a senior championship with his own club' and thanked the executive for 'having the faith and trust in me and gave me the opportunity to gain this privilege'. Ned conclude by asking the club to do 'one thing going forward, to step and
lead together as a unit chained to each other that nothing can break and that every player
would promise to never let their teammates down. I just want to say that nothing comes easy in life and definitely not in football be it as a player or manager or part of the executive. You will get lots of knocks'. Tribute was paid to Ned and his management team for the tremendous work for the club over the years.

Assistant Treasurer, Micheál Burke reported that the club had 'over 500 paid up members between adult and underage'. This represented a 'very small decrease on last year numerically and financially but to be expected with fractured year at underage and adult level'.

Debbie Newman reported that the club only played about half the number of LGF matches that the club would normally expect to play in a season but despite the restrictions over 200 girls played football with Mullingar Shamrocks in 2020. Debbie identified the shortage of coaches as a major issue going forward and one had the potential to impact negatively on the growth of LGF. The tremendous success of the team in winning the county intermediate title and the wonderful display in the Senior B championship were the year's highlights at club level and the contribution of team manager Robbie Boyle to this success was recognised and acknowledged as was the tremendous achievement of the Westmeath team in reaching the All-Ireland final with a strong Mullingar Shamrocks representation.

Chairman, Seán Hynes in his address made special reference to our under-age activities: 'The achievements of all our young boys and girls gives all of us a great sense of honour
and pride. It is particularly evident on Saturday mornings when Springfield is buzzing
with children from 3 to 12 years having great fun'. Seán on behalf of the club acknowledged 'all the great work that the underage section does for both boys and girls and the immense commitment and effort that our underage coaches have devoted to
promoting and nurturing our games'. The club's ambition was to field two Under-13 and Under-15 teams in the new season: 'We will endeavour to seek out games for players at all age groups up to Under-13, the aim of this is to ensure meaningful game time for all players'. Davy Gavin and the club's MSCO Scheme employees ensured that the club grounds at Springfield were meticulously maintained. The six-minute video showcasing our walkway and its biodiversity signposted route shown at the GAA seminar in December was a major highlight and Sean explained that 'Mullingar Shamrocks GAA Club is one of just 45 clubs, and the only one from Westmeath, selected to participate in Phase One of the new GAA Green Club programme'. The incredible work of Joan Ormsby in making all this possible was outlined by the chairman.

Treasurer, Maria Carroll was unable to 'report an improvement in the club’s finances', but especially acknowledged 'the loyalty and reliability of every member of this club. Memberships sailed in at the beginning of the year with underage players eager to get back on the pitch. Senior members and families also rowed in and had memberships paid early in the year'. The club was 'extremely appreciative of this loyalty considering the unprecedented times we were in'. Maria expressed her confidence 'that members of Mullingar Shamrocks will continue to support their club' and reported that it was decided not to 'request a moratorium due to COVID as we had funds to meet the loan repayments'.

Pat Collin's delivered his usual comprehensive report on the under-age football activities in the club. Many of our age-groups ran with training right up to just before Christmas which was a huge boost to the players and parents after a number of months of lockdown. The Na SeamrÓigí group of boys and girls were singled out for special mention. The group 'made substantial progress during the year, in learning the skills of Gaelic football under the watchful eyes of a fantastic coaching team led by Lead Mentor, Adrian Keaveney'. Pat let it be known, in concluding that 'it will be a priority again for the Underage Committee in the coming year, to source more help from parents with this particular group of players, who in a few short years will be the future of the Club going forward'.

The meeting concluded with the election of officers. Sophie Hegarty after serving a year's apprenticeship replaced Lisa Burke as Children's Officer and will be supported by Niamh Spellman. This confirmed the previous decision of the executive; Casey McDermott was appointed as the LGF Players' Representative on the executive whilst Enda Monaghan was confirmed as the club's Coaching and Games Development Officer. The other positions remained unchanged.