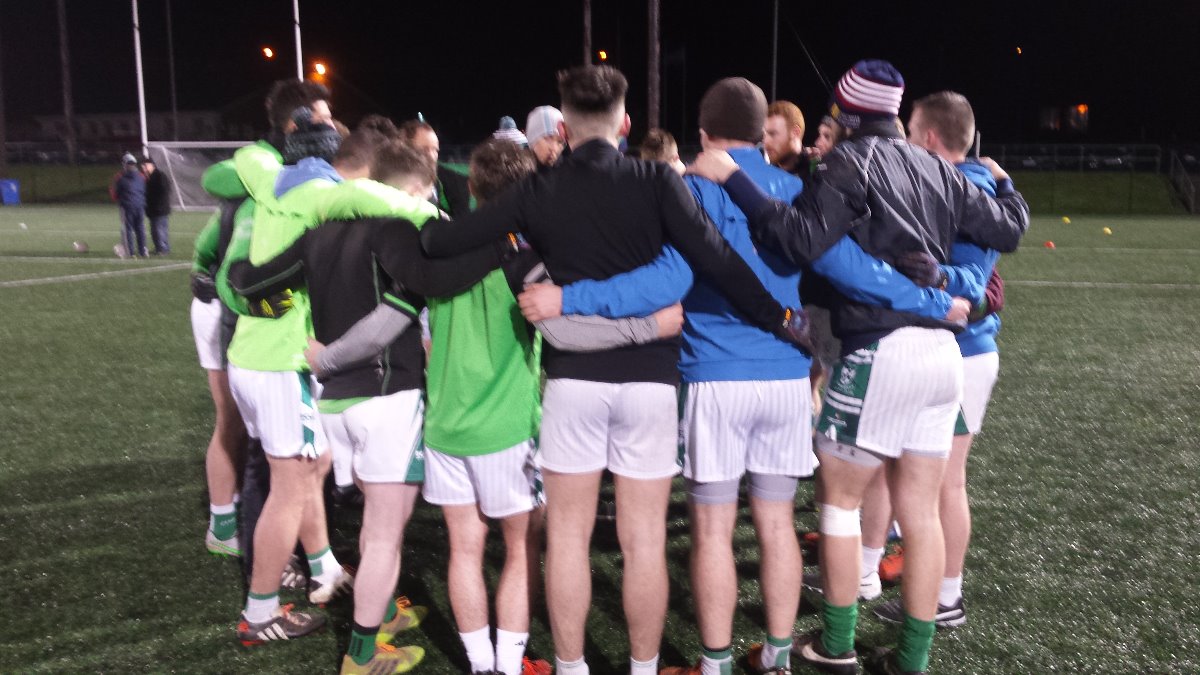 Mullingar Shamrocks qualified for the final of the 2015 Feis Cup with a merited 1-14 to 1-10 victory over St Lomans at Lakepoint Park on Friday night. Both teams were short a number of regulars with Shamrocks apparently the more understrength. Scores were hard to come-by in the early stages and in the opening 10 minutes only an exchange of points between Seanie Daly and Ken Casey were recorded in the referee’s notebook.  Paddy Joyce on one of his forward surges pointed and this was followed immediately by a Darren Keena point to put Shamrocks two points clear. Points from David Windsor and Shane Dempsey levelled matters and another Loman’s point edged the Lakepoint Park team into a single-point lead. At this stage Seanie Daly began his dramatic impact on the game with a magnificent long range point which he followed with a routine pointed free.  Brendan O’Reilly who had replaced the injured Conor Moore finished a fine piece of Shamrocks combined play involving Conor Twomey (on a comeback after his army overseas duty), Dylan McDermott and Seanie Daly by blasting the ball to the Loman’s net to give Shamrocks a 1-5 to 0-4 lead after 25 minutes.  Eddie Moore also retired injured at this stage. Three fine Shane Dempsey points and two spectacular efforts by Seanie Daly followed to leave the interval score at 1-7 to 0-7 in favour of Shamrocks.

Loman’s began the second half in spectacular fashion; a Shane Dempsey point and a Chris Gilbert goal put them ahead of the wind assisted Shamrocks. Dylan McDermott equalised; a bit of a wrestling match between Shane Dempsey and Paddy Joyce ended with a red card for the latter but Shamrocks immediately increased their work rate and neutralised the numerical deficit. Two more Seanie Daly points and another from Darren Keena eased Shamrocks into a 1-11 to 1-8 lead after 16 minutes. Shane Dempsey and Denis Corroon exchanged points, Corroon’s effort followed a sublime fifty-yard pass from Seanie Daly. Darren Keena finished a move involving Micheál Curley, Seanie Daly and Dylan McDermott with a point to establish a Shamrocks lead of 1-13 to 1-10.  A brilliant Philly Shaw save from Ken Casey in the twenty-fifth minute was crucial; almost immediately Jason Daly also saved spectacularly after Dylan McDermott ripped the St Loman’s defence after a brilliant run from mid-field. Fittingly Seanie Daly closed the scoring (1-14 to 1-10) with another fine point from a difficult angle.

This was a fine team victory for Mullingar Shamrocks who worked hard throughout the 60 minutes. Seanie Daly was the stand-out performer. Class as they say is permanent. This was the Seanie of 2012 vintage and the Seanie Daly Shamrocks will need if they are to seriously contend in the 2016 championship.  Micheál Curley also turned in his finest performance since he returned from Canada and surged forward with menace at every opportunity. Denis Corroon and Anthony Clinton dominated the mid-field exchanges and worked hard throughout. The lively Darren Keena is also on the comeback trail and his 0-3 from play was a great start on his return to senior service. Overall a great start for the new team management and Mullingar Shamrocks now play The Downs in the Feis Cup final.