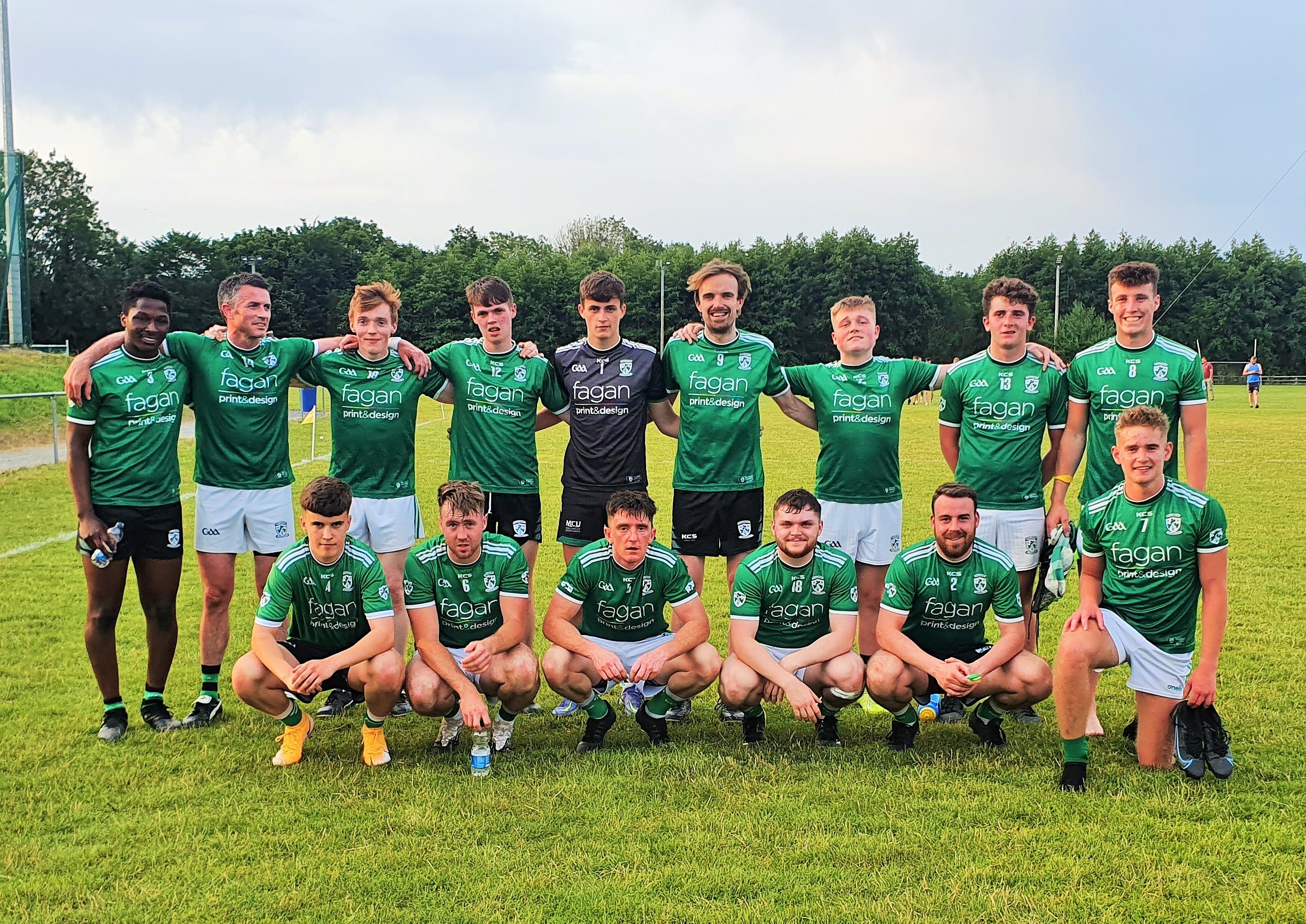 The initial thoughts were that this was a ‘What am I doing here type of game?’ and in the early stages it seemed that Mullingar Shamrocks with just 15 players and no substitutes (although John Ganley did come close to a comeback at one stage in the second half) were destined for another of those routine defeats that nobody really worried about. Shamrocks trailed by 1-1 to 0-0 after 5 minutes after Conor Jordan was presented with a goal and Eamonn Cunneen was doing a lot of damage around the field.

However, things changed dramatically and points from John O’Reilly and Trevor Keena provided the foundation for what became the Gary Corroon show for the rest of the half as the super fit veteran delivered a football exhibition for the remainder of the half. He won every ball kicked his way, he delivered sublime passes and he scored from close range and long range. It was probably his finest performance in a Shamrocks jersey. If our young talented players show the type of dedication to fitness and skill development that Gary has shown over the past decades we will have some footballers in a few years’ time. Gary pointed and then added a goal after a great run from Trevor Keena who was released by a great piece of Brain Farrell fielding. After 17 minutes the sides were level at 1-3 each and we had a very enjoyable game of football despite the intense heat. And we had a reminder of the Covid era when the water break was reintroduced and strictly policed time-wise by referee Paul McCaughey. John O’ Reilly pointed after Andrew Shaw collected a long restart by Mikey Curley. Gary Corroon kicked a long range point, Neill Hannigan added another one and in the 10 minutes before the interval points from Gary Corroon (0-2), James Larkin and Andrew Shaw completed the first half total to secure a 1-10 to 1-4 interval lead. There was also a rare sighting in this half of a mark called by the Killucan goalkeeper, something we hadn’t previously witnessed but perfectly legitimate and maybe a tactic worth considering by goalkeepers for future reference.

David Weir and Niall Hannigan exchanged points in the opening minutes of the second half before Seán Hynes and Niall Hannigan extended Shamrocks lead eight points (1-13 to 1-5). At this stage Mullingar Shamrocks were holding possession very well and after one such sustained out of ball retention Neill Hannigan’s goal scoring opportunity went to the wrong side of the posts. The move deserved better. This possession game made Bressie’s father, an interested spectator, feel right at home, he might as well have been watching a Derry-Donegal match in the Ulster championship. The Mullingar defence led by Matthew Siode and Pearse Corroon were coping well with the Killucan attacks but points by Eamonn Cunneen and Conor Jordan narrowed the gap and when Brian Smyth crashed home a goal Killucan were very much back in the game (1-13 to 2-8). Killucan continued to attack as Shamrocks tired in the intense heat but a great breakout point by Seán Hynes provided a layer of security. Brian Farrell took a black card for the team, Conor Jordan pointed a free and when James Larkin safely fielded a dangerous high ball into the goalmouth referee Paul McCaughey blew the final whistle on what was an enjoyable game of football and a great team victory for the 15 dedicated players who braved the heat and humidity to represent the club. And for Gary Corroon it was an extra special night. It is also worth noting that all of the Mullingar Shamrocks scores were from play.