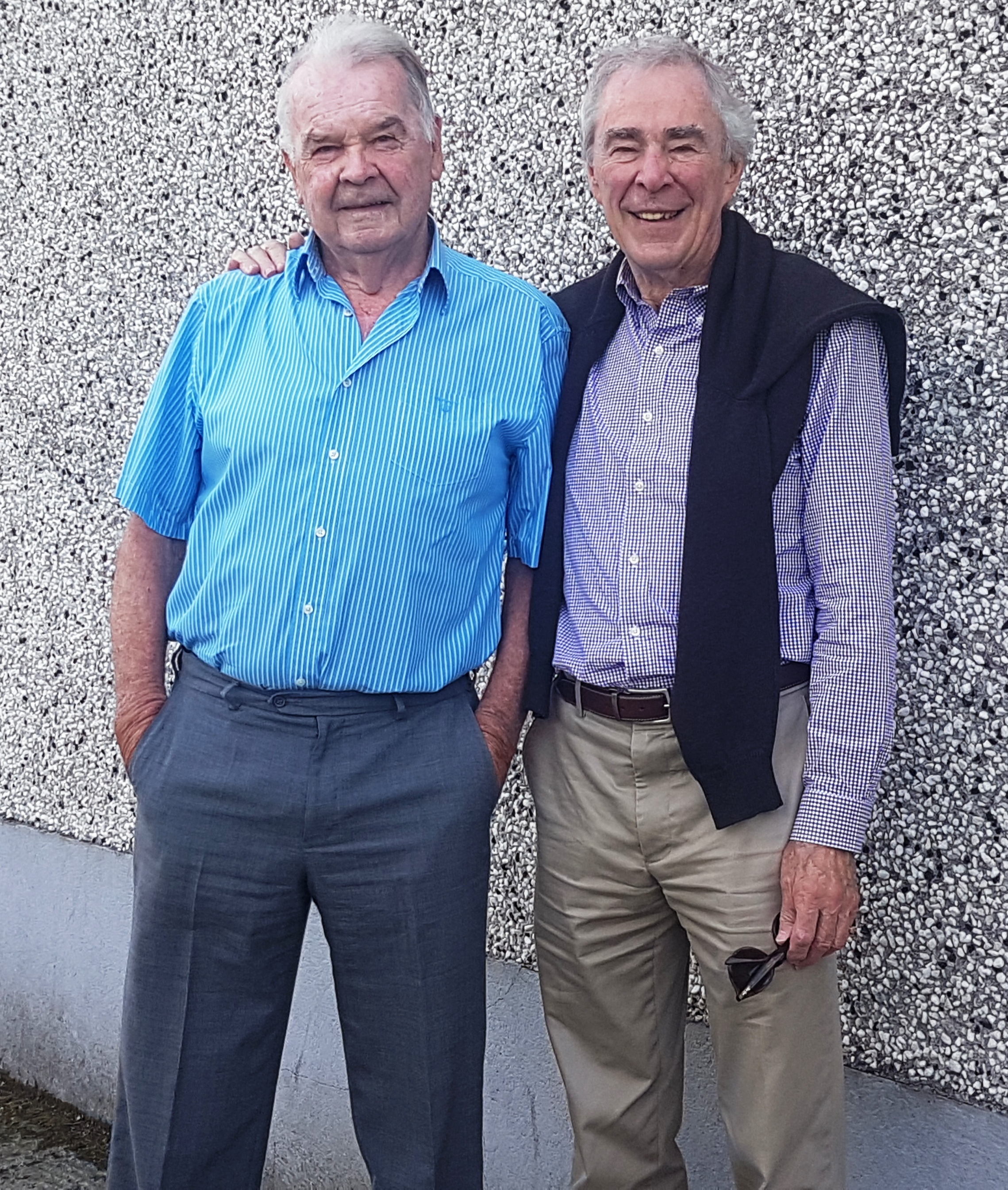 Lying in the yellow of the soft fried egg.'

IN 2019 we had the pleasure of giving Kevin Nugent the Grand Tour of our grounds and premises at Springfield. Kevin played most of his football at under-age level for Mullingar Shamrocks captaining the team to win the 1961 minor championship. Kevin was also a senior player in the mid-1960s including in 1964 when Mullingar Shamrocks won the senior title for the first time and represented Westmeath at senior level. But Kevin missed out on the 1964 title victory as he was a victim of the GAA's infamous Rule 27 which made playing soccer, rugby, hockey and cricket an illegal activity.

In 1964 Kevin was a student in St. Columban’s College, Dalgan studying for the priesthood. He read in the Westmeath Examiner that Mullingar FC were running a tournament in the Dog Track and entered the Dalgan team called the SCCs. This was an attempt to hide the fact that the team was from St. Columban’s College, as many of the players were Gaelic football players. The team included Eoin Hand as a guest and the SCCs came away with a draw, in a game in which Kevin Nugent scored the goal. Kevin remembers togging out in the Cusack Park, shortly thereafter, unaware that he was not to be included in the team, as no one had told him that he was suspended. 'It was just that my name was not read out with the team and only then was I told I was banned because someone had seen me play soccer at the Dogtrack and reported me', Kevin recalls.

Here in this poem 'written a long time ago' and reclaimed from the 'miscellaneous file'. Kevin gives an insight into the excitement associated with playing football on a Sunday and for Mullingar Shamrocks. It is a poem that provides a superb insight into the world as it was in the late 1950s-early 1960s, a time that is unrecognisable to the present time.

Or a wonder told shyly,

Oh, she was the Sunday in every week”

From the Planter’s Daughter by Austin Clarke

Sunday was the prince of days,

Each and every week without fail

Join their voices in a world of light

Trading peal for peal and song for song.

So jumping into Sunday suit and ready shining shoes

I head for Mass by half past eight

Through the stretching waking town.

Watch the Mass-wheel do its turn

Then race on home when duty’s done.

All elbows at the kitchen table

Lying in the yellow of the soft fried egg.

The socks of green, the colours of our town,

The low cut boots, all dubbined into soft supple leather

Heart thumping. Heading out into the town

On to the Cusack Park.

Inside the dressing room,

The smell of stale sweaty jerseys

Mix with liniment and wintergreen.

Thick as incense at midnight Mass.

Way too small for us,

And we jumping out of out skins with energy to burn.

Watch their heroes prepare for battle.

Then, Mick reads out the team

The familiar litany of names and positions,

That was us, the Mullingar Shamrocks.

Straining to hold ourselves back,

Till at last, just when we could bear it no more,

The word comes down - “The Downs are on the field”.

Squeezing through the gates

We burst on to the open pitch.

“Thruppence each the juicy pears.

Get your colours for the game”

In the summer Sunday sun.

Now I’m there on the crew-cut grass

The white ball at myfeet

Flying through the air,

Feeling the power inside,

Paddy you’re a caution, like your father Kit before”.

Tossling our hair, slapping our backs,

Singing our praise in local metaphor.

Deadbeat, we flop on to the long wooden forums

Slowly peeling off our socks,

We head back up the town,

Muddied boots slung across our shoulders

The spoils of war,

We fan out across the empty Sunday street,

Let the traffic find its way,

We own the town today.

But we push on

Re-living every kick and every goal

Re- playing every move and every score,

Holding on to the game,

That was our Sunday.

And Monday – Monday was the overflow of Sunday

On Monday, we retold the tale of Sunday

So that Sunday lived again.

Professor Kevin Nugent is a founder and director of the Brazelton Institute, the Division of Developmental Medicine, Boston Children’s Hospital,Professor Emeritus, at the University of Massachusetts and Lecturer, Harvard Medical School (https://www.childrenshospital.org/research/centers-departmental-programs/brazelton-institute) . Kevin is also the author of Your Baby is Speaking to You, a highly acclaimed, top-ten bestselling book for parents. In recent years Kevin has lectured in Shanghai, Dublin, Wellington, Melbourne, Florence, Oslo, Dublin, Clonmel, Shenzen, Seoul and Montreal and has the distinction of addressing both the House of Lords in May 2016 and at Leinster House, the Joint Committee on Health and Children of the Oireachtas in November 2015. The focus of Oireachtas address was on the first three years of life which are a time of massive brain development, with lifelong implications for future mental health. Policies that support families are critical as the strength and quality of the relationship between parents and family and their children are fundamental to the effective development of children’s brain’s functions and capacity.