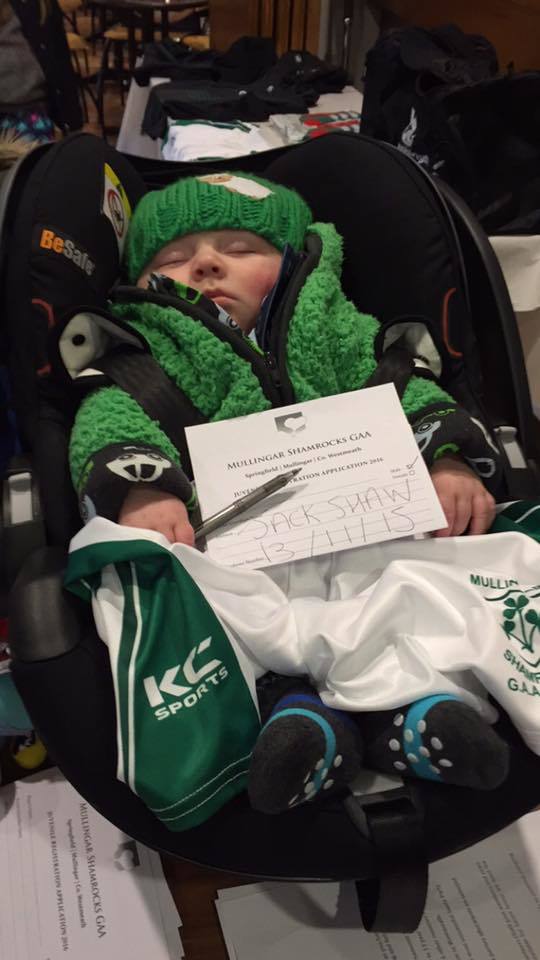 Our Open Day and Registration was a great success and the busiest ever experienced by the club. From 2 to 4 pm there was a constant stream of young people and their parents through the doors of the Clubhouse. Jack Shaw was a hand’s down winner of the Best Dressed Newcomer and the Coolest Newcomer. On the day that the GAA introduced a Child Membership Category to its constitution perhaps Mullingar Shamrocks could make the case for Jack to be recognised as the GAA’s first and youngest Child Member.

At the weekend circumstances combined and pushed Shamrocks’ ability to field in both our ACL Div. 1 and 2 matches to the limit. A combination of inter-county commitments, work demands, red card transgressions, injuries, transfers and education commitments raised the spectre of having to concede a walk-over in one or more of the three games originally scheduled. Fortunately, the Div. 5 game was postponed and Eddie Casey and his management team performed a miracle of loaves and fishes type trick to ensure that we fielded in both games in the space of fifteen hours. Conceding a walk-over is to be avoided at all costs and is not part of our GAA culture. Shamrocks were beaten in the ACL Div.2 by Tubberclair (1-14 to 0-7) and in the Div.1 match by Garrycastle (0-13 to 0-5).  Our team against Tubberclair lined out as follows: Daragh Ryan; Davy Coyne, Robert Ryan, Kyle Maguire; Stephen Hassett (Pearse Corroon), Paul Christie (David Culkin), Sam Gilmartin; Donal O’ Donoghue (0-1) and Dylan McDermott (0-2) [Anthony Clinton]; Mickey McKnight, Nathan Smyth, Brendan O’ Reilly (0-2); Darren Keena (0-2) [Ross Brady], Gary Corroon, Ross Corroon.

We lined out against Garrycastle with the following team: Philly Shaw; Eddie Moore, Paul Christie, Davy Coyne; Pearse Corroon, Micheál Curley, Sam Gilmartin; Anthony Clinton (Daragh Ryan) and Kieran Gavin; Ross Corroon, Conor Twomey, Dylan McDermott; Darren Keena, Donal O’Donoghue, Mickey McKnight.  There were positives to be drawn from the matches; we battled hard in both games and Kieran Gavin returned to active service; so too did Davy Coyne, Sam Gilmartin and David Culkin. Full marks to all involved in salvaging the fixtures especially the eleven players who fielded in both matches in less than twenty-four hours.

For the second successive week our under-16 team went down to a single-point defeat to Longford opposition when we were defeated by Western Gaels at Dunbeggan Park, Lanesborough (3-13 to 4-9). Once again the team turned in a fine performance and rallied strongly in the second-half after being down by 11 points at the interval (2-8 to 0-3).  The panel of players involved was Brandon Heffernan, Jack Kelly, Cian Fox, Ronan McHugh, Cormac Darby, Conor Fitzpatrick, Marc Eivers, Dylan Murphy, Dillon Matthews, Trevor Keena, Cormac Hynes, Peter Hynes, Robbie Croash, Matthew Ryan-Maslin, Eoin Kilduff, Peter Bane, Dylan Roe, Joshua Haugh and Adam Duggan.

An important change in the playing rules made at the GAA’s annual Congress in Carlow on Saturday is the one that is most relevant for 2016 and may be good news for Daragh Daly, Denis Corroon and all our other high fielders. A player who catches the ball cleanly from a kick-out without it touching the ground, after it has crossed the 45 metre line will now be awarded a mark.  As a result the player making the mark is entitled to a free kick from the hand which must be taken within five seconds. Alternatively, a player who opts not to avail of the mark may not be challenged for the ball until he carries it for a maximum of four steps and/or ‘makes one act of kicking, hand-passing, bouncing or toe-tapping the ball’. The other age-related changes affecting minor and under-21 do not come into operation until 2018. It should however be remembered that for 2016 adult competitions a player must be eighteen years of age in 2016.