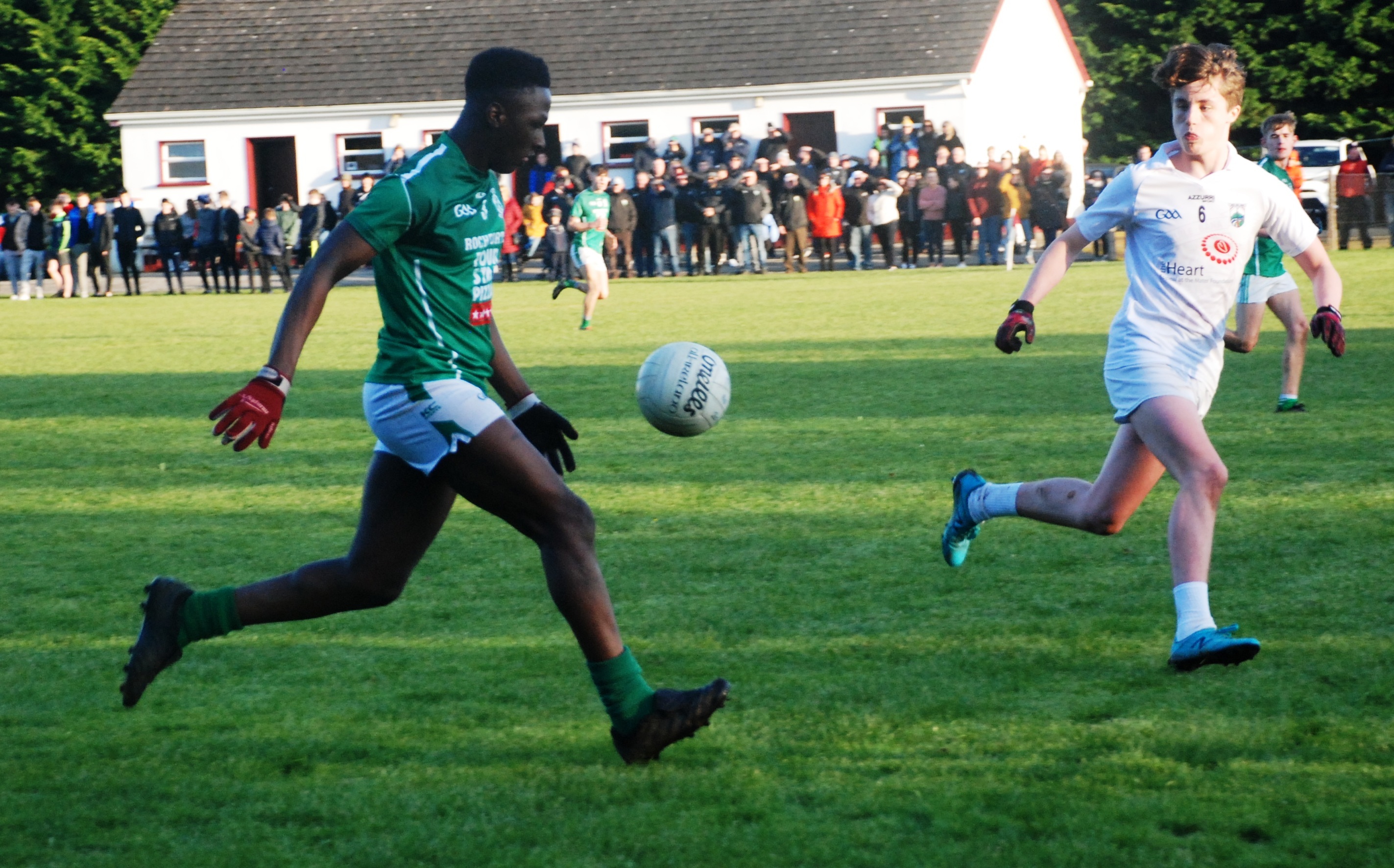 Reporters like to identify the key moment in a match. On this occasion the key moment happened some days prior to the throw-in when Jack Gillen suffered a bout of tonsillitis. Instead of lining out in Ballinagore and contributing his normal 8-10 points to the Mullingar Shamrocks total, Jack was confined to a hospital bed and we wish him a speedy recovery from his illness. The loss of the scorer-in-chief and ace free taker was too much on this occasion. However, as Brian Cody likes to say when it suits him 'We were short nobody out there, we had fifteen players on the pitch' and the Shamrocks players on duty battled hard but Moate All-Whites played the better football on the day and were deserving winners.

Shamrocks dominated the early stages but this was not reflected on the scoreboard and a number of good scoring chances from both free kicks and play were wasted. As often happens, Moate All-Whites punished this tardiness and good break away points from Tobby Conteh, Garvan Cunningham and Eoghan Curran established a Moate lead that was never subsequently lost. Trevor Keena finally registered Mullingar Shamrocks opening score, and only score of the half, when he pointed in the fifteenth minute. Owen Higgins made a great save from Oliver McNamara but Harry Niall, Toby and Conor Bracken (0-2) added points to the Moate total to leave the score 0-7 to 0-1 in the All-Whites favour at the break. The single point for Shamrocks was a very disappointing return from a half during which ten wides were recorded despite playing against the wind.

Mullingar Shamrocks responded to the challenge on resumption and a pointed free from Trevor Keena and one from play by John O'Reilly reduced the deficit and when Trevor raced through the defence and crashed in Shamrocks opening goal the recovery was underway. Another Conor Bracken point extended the Moate lead and a Phillip King goal shortly afterwards neutralised the good work after the restart. Shamrocks had a let-off at this stage when a Moate shot crashed off the post; Ollie McNamara and Emmet Walsh pointed to take advantage of the escape (1-8 to 1-5). Garvan Cunningham pointed a long-range free that looked outside the posts but the man that mattered raised the white flag to extend Moate's lead to 0-4; an Ollie McNamara point neutralised this score. There was still time to snatch victory and when Trevor Keena raced through an equalising goal seemed inevitable. However Owen Higgins reacted brilliantly and executed a superb diving save to keep his net intact. Trevor pointed the resultant 45 to reduce the lead to 0-2. However that was as good as it got for Shamrocks. Another Garvan Cunningham point followed Keena's effort. A free in the Shamrocks half-back line was taken quickly but was passed to a Moate player who launched an attack that eventually broke down with the ball collected by Seán Óg Hynes. Unfortunately, Seán Óg was dispossessed and Philip King shot to the net. The agony and the ecstasy of goalkeeping illustrated in a four minute vignette. An occupational hazard associated with the position. Eoghan Curran added a third goal and the man who played more ball than anybody else on the field, Toby Conteh added a point before the final whistle.

The final score of 3-11 to 1-7 was a bit rough on a Mullingar Shamrocks side that found scoring difficult on the day but full marks to all involved for the effort and commitment to the cause. This group of footballers have improved beyond all recognition over the past six months and it is important that this is recognised. The work of Joe Kenny, John Doran and Pearse Corroon was not rewarded with a county title but there will be other days and there is little doubt that many of those who lined out in the Mullingar Shamrocks colours will represent the club at adult level in the near future.