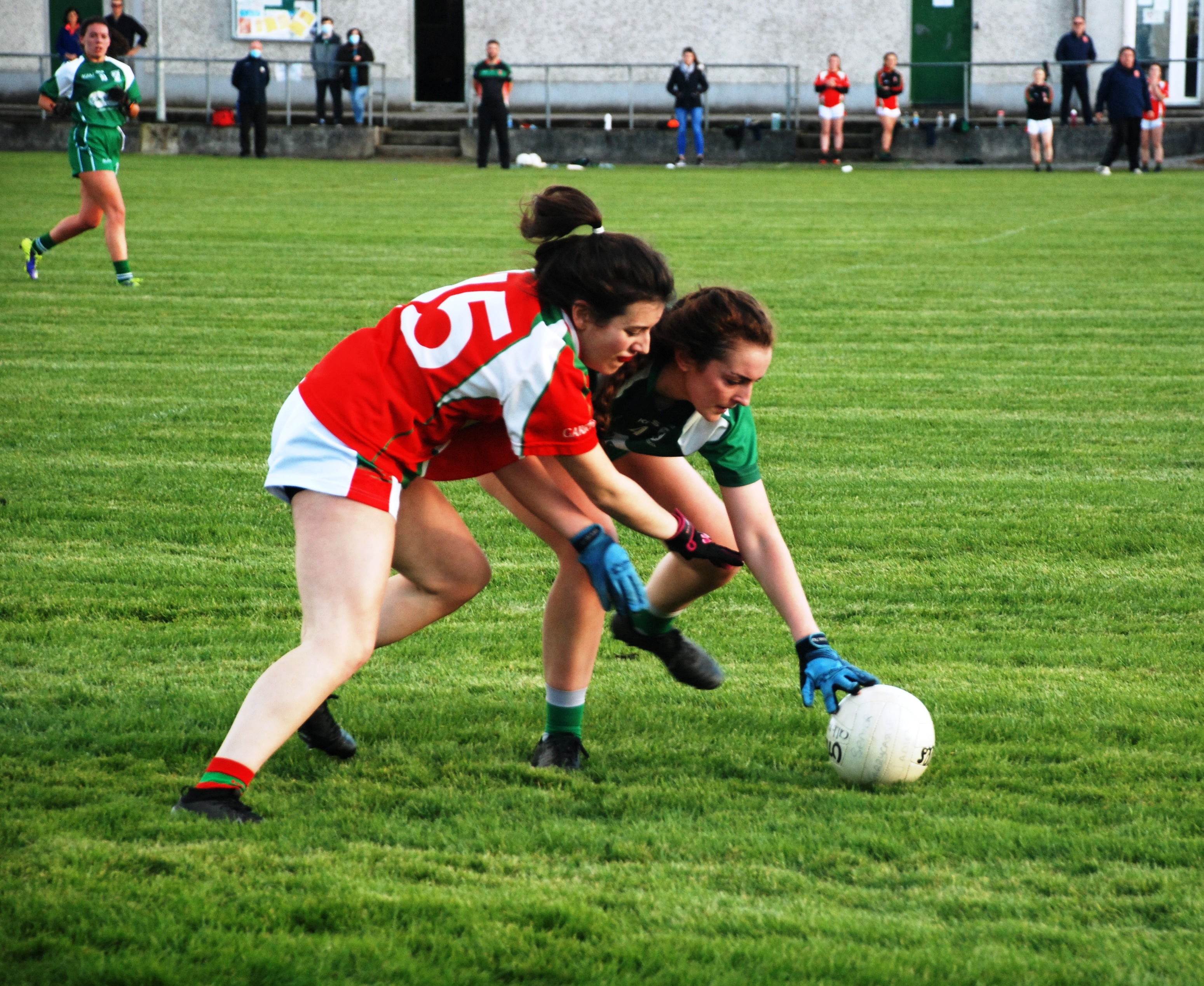 'This was the best game of football, I have seen in many years'. These were the words of Emma Morris one of Mullingar Shamrocks most distinguished practitioners of the LGF game. And there was no doubt, Emma called it correctly as the footballers of Mullingar Shamrocks and Garrycastle served up a LGF classic in Springfield on Saturday evening. The match overflowed with all that is good in the game and extra time was required before Garrycastle qualified for the county final.

Shamrocks started impressively and registered two great team scores in the opening minutes: Laura Culkin scored the opening point after Mairead Newman fielded Katie Kelly's kick out, passed to Shona McNicholas who found Carole Finch who set up Laura for the game's opening point; Cliodhna Spellman's great run created the goal scoring chance converted by Carole Finch to send Shamrocks into a 1-1 to 0-0 lead. These two scores set the pattern for what was to follow: great skilful football coloured by great individual and team scores. Garrycastle hit back and their midfield pairing of Danielle Madden and Kate Brennan added a point each; Madden added a goal, so too did Stephanie O'Neill , Aoife Dolan pointed so too did Sarah Geoghegan for Shamrocks and at the first water break Garrycastle were ahead by 2-3 to 1-1.

Mairead Newman roared into the match after the restart and scored a brilliant goal. Holly McCormack added a goal and a point and then scored her second goal. Mairead Newman broke through on goal, was taken down and Holly McCormack blasted the penalty to the net to complete her hat trick of goals for the second quarter. Significantly this proved to be Shamrocks last goal which was decisive in the end. During this scoring blitz Kate Brennan, Stephanie O'Neill (0-2), Aoife Dolan and Shannon Mulvihill had points for Garrycastle who trailed at the interval by four points (5-3 to 2-8).

Garrycastle dominated the third quarter and added six points to their total before Carole Finch pointed for Shamrocks (5-4 to 2-14). A couple of great saves by Katie Kelly (who was very impressive between the posts) and some fine defending by Lavinia, Catherine, Carla and Sophie kept the Garrycastle forwards in check during this period. A goal from Orla McGettrick added to the Garrycastle lead but this proved to be the Athlone club's last score of the quarter as the Shamrocks women refused to surrender and points from Laura Culkin (0-2) and Holly McCormack (0-2) brought the teams level (5-8 to 3-14) before Mick Gordon called a halt to normal time with Shamrocks on a roll.

Points from Aoife Dolan and Shannon Mulvihill put Garrycaste 0-2 ahead at the extra-time interval break two more Mulvihill points extended the lead before Shamrocks again controlled the play. Holly pointed a free, Jenna Kelly added another point after a great run (5-10 to 3-18) but Ailish Mannion got a crucial point for Garrycastle. There was time for just one more point from Holly McCormack before the final whistle was blown.

A great season for adult LGF for Mullingar Shamrocks ended with a great battling brave display in what was a superb game of football. Well done to all involved and it was great to see the all the ineligible panellists from the intermediate team present on the sideline encouraging their colleagues. Well done to all concerned.