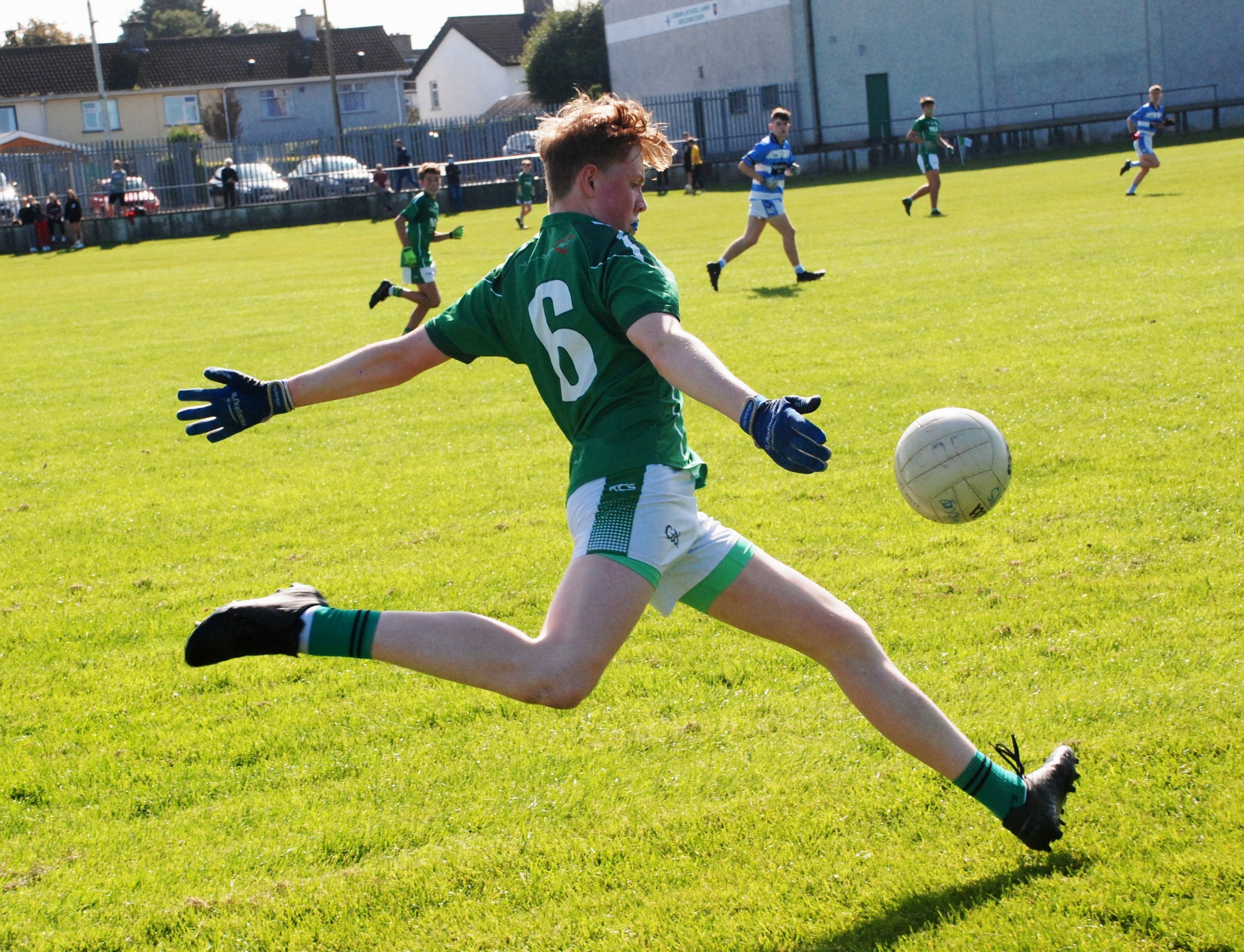 In the end it wasn't to be as a brave comeback against a physically powerful Athlone team fell just short in the Under-15 Championship semi-final played on Sunday morning in Springfield. Athlone dominated for large stages of the game and got the crucial scores at the right time in the match. Shamrocks trailed by 1-4 to 1-0 at the first water break with Ryan Kelly's punched effort the only score registered by Shamrocks. Athlone defended well and attacked continuously. A great Conor Heffernan point was followed by a superb strike by the same player for Shamrocks second goal. This was a great three play goal as Shane Ormsby fielded Fallum Creighton's kick-out and moved forward before passing to Conor. Sometimes football can be a very simple game. However Luke Nicholson and Johnny Martin added to Daniel Omokora's opening goal to secure a 3-5 to 2-1 interval lead for Athlone.

Shamrocks had the advantage of the strong wind in the second half but a Cillian Geary goal added another blow to the Shamrocks cause. Johnny Martin added a point from a free to extend the Athlone lead to twelve points. Luke McCabe blasted to the net and a brilliant Conor Heffernan pass (the best seen in Springfield this year?) sent Alex Sheerin clear on goal but the Athlone keeper Jason Rushe got the better of this one-on-one exchange. Luke McCabe again pointed as did Johnny Martin from a free, John Ryan added another point before Mick Gordon called the second water break with the scoreboard reading 4-8 to 3-3 with Shamrocks down but not quite out.

Drastic surgery was required and Shane Ormsby was switched to full-forward with Ryan Kelly moving to midfield and Shamrocks adopted a route one aerial bombardment approach. Shane created havoc and quickly kicked two points before he was dragged down for a penalty which he dispatched to the Athlone net. A great escape became possible as the margin was reduced to three points (4-8 to 4-5). Athlone responded and a superbly worked team goal was finished to back of the net by Luke Whelan that extended the lead to 0-6 with 10 minutes remaining. Shamrocks came roaring back, Gavin Pierce kicked two fine points, Jason Rushe again saved brilliantly this time from Callum Rigney before the superb Conor Heffernan added another point to cut the margin to three points. Unfortunately, there was time for no more and after a match that was a great advertisement for the quality of Westmeath underage football, Athlone had qualified for the first Under-15 county football final.

There was a lot of disappointed Mullingar Shamrocks players but on this occasion the better team won. Practically every member of this team can go on to play senior football for the club should they so desire. Many will wear the county jersey with distinction. For the club it was a very positive championship: we are competitive again at the highest level of Westmeath football after six or seven years outside the loop.

The contribution of the team management must be acknowledged. We tend to forget the amount of effort, time and sacrifice that is involved in developing and encouraging a squad such as this. Tom Ormsby, Derek Sheridan, Barry Kelly and David Cornally spared neither time nor effort with this group. Enda Monaghan took a number of coaching sessions too and Janice O'Brien was a quietly efficient Covid officer for the group. Well done to all.