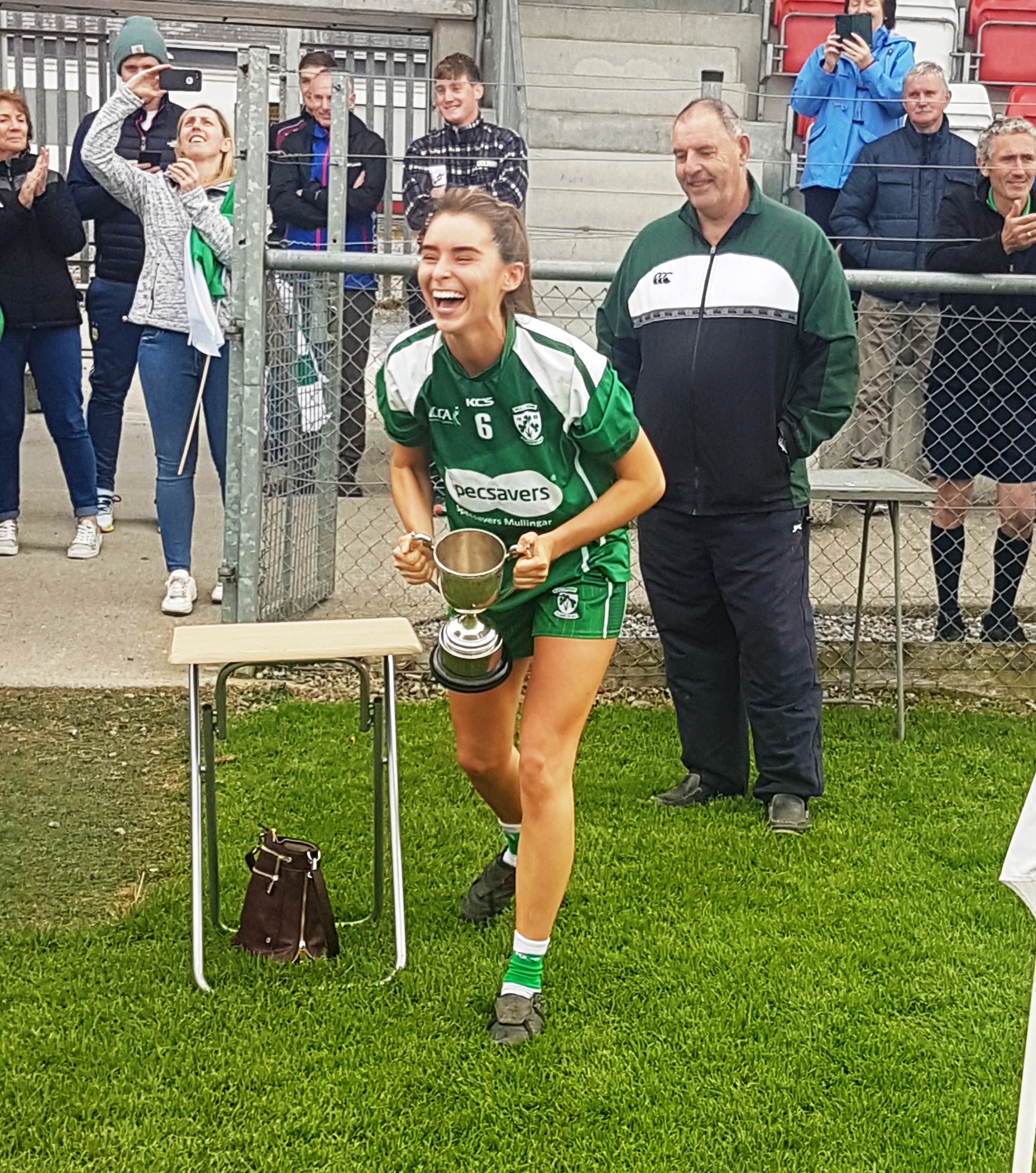 A GREAT day for our LGF intermediate team as senior status was regained after a superb championship campaign that ended in glory in Kinnegad on Saturday evening when Tara Fagan was presented with the Mary Wynne Memorial Cup. COUNTY CHAMPIONS has a nice sound to it. The Mullingar Shamrocks women dominated from the start and had the ball in the Killucan net within thirty seconds. Anna Jones, the outstanding player on the field, won possession from the throw-in and powered through the middle before passing to Emma Morris who goaled with an outside-of-the-boot effort. Killucan recovered from the early setback but their best attacking efforts were repulsed by a superb Mullingar Shamrocks defence anchored by the fullback line of Rachel Hannigan, Niamh Spellman and Melek Fagan with the halfback line of Chloe Swarbrigg, team captain Tara Fagan and Susanna Buckley equally tenacious. After eleven minutes of scoreless play, Karen Hegarty extended the Shamrocks lead with a point from a free and Karen then added two more points from play to establish a 1-3 to 0-0 lead at the first water break for Shamrocks.

On the restart, Anna Jones made another significant contribution, when she again raced through the Killucan defence and created a goal scoring opportunity for Clara Thornton who crashed the ball to the Killucan net. Clara was everywhere during this half, winning great possession and popped up at left corner forward to take the pass from Anna. Fiona Levy responded with a pointed free for Killucan. Karen Hegarty was wide from a free but the Killucan restart was fielded by Chloe Smullen who raced through on one of her flying solo runs and shot past Sarah Kiernan in the Killucan goal to extend the Shamrocks lead to eleven points. Anna Jones and Karen Hegarty added two more points and with a 3-5 to 0-1 lead at half-time it looked good for Shamrocks.

Meghan Carroll pointed for Killucan three minutes into the new half but this was neutralised by a Karen Hegarty punched point six minutes later. Karen added another point from a free as Shamrocks continued to dominate. Sarah Kiernan saved well from Emma Morris before she was deceived by a spinning shot from Chloe Smullen that yielded a fourth goal for Shamrocks. Chloe then carved open the Killucan defence but her finishing shot crashed off the crossbar. Áine Melody was doing great work in her role as an extra defender and closed down several attacks with her reading of the game. Killucan never gave up and Meadbh Monaghan pointed twice from frees, Aoife Darby kicked a fine point and then added a goal but it was too little too late. Karen Hegarty completed the scoring for Mullingar Shamrocks with a point after good work by Michaela O' Connor and a goal with Anna Jones again contributing substantially to this score.

Although several individuals contributed handsomely to the Mullingar Shamrocks victory, ultimately the return to senior status was achieved by a great team performance by a very fit Mullingar Shamrocks side who played excellent football with a game plan based on retaining possession but moving the ball forward with pace. All the hard work paid off and the players won a county title that they richly deserved for their dedication not only this year but over the past number of years of near misses at senior level, the heartbreak of relegation in 2018 and the disappointment of last year's final defeat to Coralsotown-Kinnegad. We should never underestimate the service these players have given to Mullingar Shamrocks in so many different roles. Niamh Spellman, Lorna and Emma Morris, Áine Melody, Karen Hegarty and Carole Finch played on the Shamrocks team that won the intermediate title in 2009, the last occasion the title was won. Lisa Burke captained that team and on this occasion formed part of Robbie Boyle's management team with Carole.

Lauren McCormack, after a few days of warm weather training and surfing on the beach at Lahinch had a relaxed evening between the posts; Lauren's restarts and her calm presence between the posts have been instrumental in the Shamrocks success. The excellence of the fullback line has been mentioned already. The return of the Spellman sisters from the Middle East was a tremendous boost for the team and the performance of Niamh Spellman at fullback was one of the season's highlights. Melek and Rachel were virtually unbeatable all year in the corners with Sophie Hegarty and Lorna Morris offering great backup support when summoned to duty. Team captain Tara Fagan, a fierce competitor and brilliant footballer, anchored the half back line and was well supported by the rock solid Chloe Swarbrigg with Susanna Buckley, a revelation in her new wingback position. Cliodhna Spellman offered great back=up support when called into action. Anna Jones and Laura Whitelaw formed the perfect midfield combination; Anna once again displayed all her outrageous football talent: the athleticism, the power and strength, the fielding and football ability were all on exhibit. Laura Whitelaw was the perfect midfield partner with her phenomenal workrate. Emma Morris at centre forward provided more evidence that class is permanent and Emma's general play and finish for the opening goal was sublime. Áine Melody was a strong candidate for Player of the Match and she carried out her defensive role exactly to plan. Clara Thornton had one of her finest ever games in the Shamrocks jersey and was brilliant in the first half when the pressure was greatest. Clara moved around the forward line with great effect and popped up in the left corner forward position to score Shamrocks' second goal. And then there was the full forward line, the footballer, the soccer player and the rugby player - all great LGF players and lethal all year and contributing 3-7 on this occasion. Karen was Karen and led the line with characteristic brilliance; the availability of Chloe Smullen and Honor MacNamara was crucial to winning this title. Chloe's pace and shooting ability are prize assets; Honor's accuracy and football intelligence added multitudes to the team. All three have more football to play this season: Karen with Westmeath, Chloe with Peamount United and hopefully with Ireland in under-age soccer and Honor returns to her medical studies in Trinity College where she captains the college's rugby team wearing the No. 10 jersey. We wish them the best. Michaela O'Connor (recruited via Facebook), Ally Bane contributed when introduced; Carole Finch in a playing and management role added another accolade to her remarkable career in LGF at both club and county level. Liveta, Casey, Máiread, Holly and Laura Culkin played their part on the journey to the final. Geraldine McCormack looked after the medical side of things and Debbie Newman performed the multitude of tasks required to ensure that the journey to the title was as smooth as possible.

And finally, the ringmaster supreme Robbie Boyle who volunteered to take on the role of manger and coach to the team back in the pre-Covid era. Supported by Lisa and Carole, Robbie moulded a very fit team with a rigorous but enjoyable training regime that played to a game plan based on retaining possession and moving forward at pace. The county final was played on the on the twenty-fifth anniversary weekend of Dublin's 1995 All-Ireland title victory when Robbie was a member of the winning Dublin team.

Congratulations to all involved and it's a shame that we don't have a Leinster Club match to come.