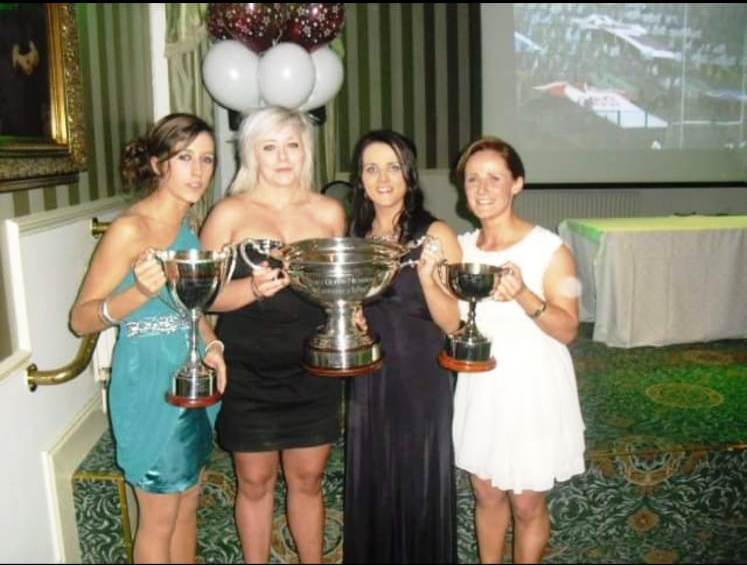 Emma Morris is one of Mullingar Shamrocks all-time great players and has been a superb player with the club for many years scoring numerous goals and points from play and frees. Emma also has a great record with Westmeath and was a key player when Westmeath won All-Ireland and National League titles in 2011. Emma was top scorer with 1-26 in the league campaign and scored 1-7 in the championship series and with a combined total of 2-33 was Westmeath's leading scorer for the year followed closely by Karen Hegarty who scored 4-22. Great days for Mullingar Shamrocks LGF. Here Emma remembers where it all began and recalls the sacrifices, the joy and the heartbreak of Westmeath's great 2011 campaign.

So when Tom first contacted me I thought he was asking me to write about my football career and had to tell him I had no intention of hanging up the boots just yet. However, he reassured me it was to tell my All-Ireland story and a quick overview of how I started playing football.

I first started playing football at a very early age at the Downs GAA summer camps where I would stay with my nanny and granddad (Christy Whelehan, R.I.P, first President of the Westmeath GAA) and they would bring me and my siblings to the camp. It was the fun I had at these that enticed me to play football and it was here at this club I learnt all my bad habits too!! I joined Mullingar Shamrocks then after the advice my granddad gave us which was "play where you live and with your friends, football that way will always mean more”, he was so right.

My parents encouraged and supported me in whatever I wanted to do or needed to go and loved that I enjoyed it. They still do. I started playing with my school team, Presentation Senior School, around this time also and we got to the Cumann na mBunscoil final. It was on this occasion I got my first taste of defeat in a final, something I became very accustomed to as a footballer!

My county journey started when I made the under 12 panel and I played with Westmeath all the way up to minor. I won a few medals with Westmeath underage, even if they were mostly in B competitions :) I remember very little of the details if I’m being honest, only that I started playing as a cornerback with Westmeath and one of the forwards was missing one day so I got moved into the forward line. I have stayed around that forward line ever since. I played senior a couple of years on and off before the famous 2011, but did not make much of an impact on any of these panels.

I got a call to trial out in November 2010 under Peter Leahy, Alan Mangan and co, and I made the panel to my delight. I loved the training sessions despite them being tough at the start, the weights programme, the hard endurance stuff in the rugby club and not being able to move without pain for days after them! It was weird though as I looked forward to training each week as we were having good craic along the way and personally I knew I was improving!

It was a huge commitment for me to play with Westmeath in 2011 as I was in Tralee College and had to make the long journey back every weekend for training. My daddy used to collect me in Tralee or Limerick as the bus would never make it home in time and we often left at 4.00 am in the morning to get back for 9.00am lectures for midweek sessions (He is still waiting for me to clear the diesel receipts). It all paid off when we won the league and I happened to be top scorer (1-26) in that campaign which gave me a huge boost. We went on to win Leinster also so I guess really began to believe in the All-Ireland dream from here.

The road to Croker was intense, with every game coming down to the wire. I earned my place to start all of the championship games up to the semis which I was very proud of as the panel was bursting with talent. I worked super hard in every training game, as there was immense pressure for places and it was in these we nailed down a starting place in the next game. I had a few very competitive battles marking Finchy thrown in there, she was harder to play against than anyone, these battles really stand out to me when I look back. I was thrilled to have started the semi-final and I scored a great goal that day when we were behind against Limerick in the second half, to put us in the lead. I am proud of that one! (See Photo).

I was over the moon to be in the final at the end of that game and couldn’t wait for the weeks ahead. I will admit I was happy it was Cavan we were playing as we always have great battles with them. On a personal level I had a great game against them in the first round of the Championship scoring 3 points from play out in Ballinagore and being positive going head to head against a team is crucial to how I perform. Sadly though in the first final I didn't make the starting 15, and although I was very disappointed, I understood that is that reality of football and everyone on the squad deserved their place. I couldn’t complain about the starting 15 so I was 100% behind all of the girls and when I came on that day I fisted a point and was relieved we got to fight another day.

However, the replay was a different story, I was left very disheartened. On this occasion the management team decided to play a girl who had not played all year and joined the panel at the very late stage of the semi-final. She was a very talented footballer and athlete, trained hard when she came on board but she was not part of the panel for all of the season but in particular for the championship (None of the panel were angry at this player personally, but management. We were behind her and obviously wished her all the best). It honestly left me wondering what I had done (or didn’t do!!) between the semis and final to not get my starting place again, but also for management not to play any of the other subs who they trusted all year and who had also played their part in getting us to this stage. There was a very negative atmosphere after the announcement of the team that week, many were upset, gutted and angry, emotions you should not feel in the lead up to an All Ireland Final Replay! However, we regrouped and all the focus was on getting our hands on the Mary Quinn Cup.

So swiftly back to talking about happy times, because the year 2011 was full of them with Westmeath. In the replay Karen Hegarty got the start, I was delighted for her as my club-mate as she truly deserved it and more importantly we got the win that day. I featured as a substitute that day and being on the pitch at the final whistle was surreal, no words can describe it, it was one of the best feelings in the world. The celebrations that followed that night and for weeks after were mighty! :) The homecoming is something I will never forget and how proud all my family were of me, in particular my Mammy who followed me around the country that year, as she always did and continues to do :) Olga was another top fan I must mention that year travelling the length and breadth of the country with mammy to my games. My twin Ciara and sister Lorna always had my back in anything I needed that year, whether it was a positive word when I was under pressure with college or football or even just to do my makeup on nights out, no lie!! :) I wasn't short of support that's for sure.

It was a huge honour for me to represent Mullingar Shamrocks that year with Carole, Gemma and Karen (See photo). How could I not mention Gemma that year, she was our keeper and she was outstanding throughout the campaign, we were always in safe hands. The support the rest of the girls in the club gave us was phenomenal, especially when we had so many occasions to celebrate they were always there waiting at the Crossbar doors :)

Lastly, I admire any of the girls who did not get a run out during that championship yet still came back each session and trained as hard as everyone else, as it would have been easy not to. That is commitment for you. At the end of the day the success we achieved that year came down to training and commitment and we all had it. We had what it took to win an All Ireland and win the three-in-a-row :) Something I am so proud and honoured to have been part of.

Now to win an Intermediate medal this year!! ;)