Guard of Honour for Tommy Gilhooley ... 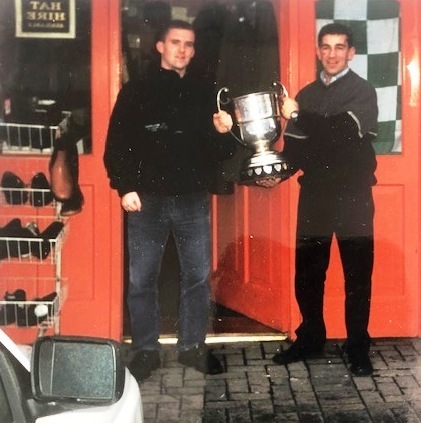 Mullingar Shamrocks are doing a Guard of Honour for our Honorary President, great supporter and friend Tommy Gilhooley tomorrow Monday 29th after 12 noon Funeral Mass in the Cathedral.

We are meeting no later than 12.20pm in the Cathedral Grounds.

If you can make it please do.

The attached photograph (thanks to Eddie Casey) documents a part of Mullingar Shamrocks history. Tradition dictated that on a Monday of a championship win the cup would be brought to Tommy's shop. Tommy would stick a few pound in the cup to but the lads a drink. Typically Tommy is not in the picture as he wasn't one for the limelight. Thinks were done quietly and without fuss.