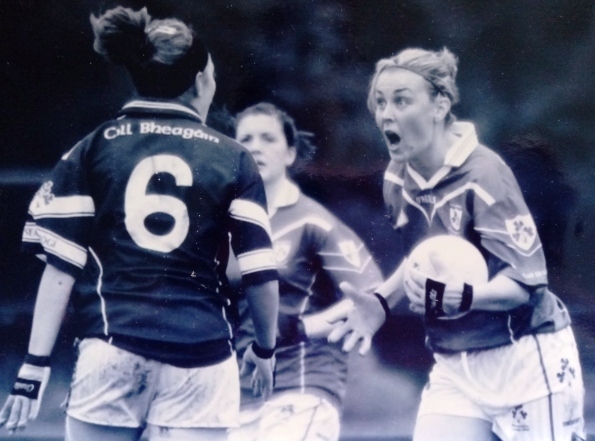 'My earliest memories for the club was being brought to Springfield with my father and brother to pick stones off the back field ...'

Lisa Burke is one of the great Mullingar Shamrocks LGF players and club members who has served the club as a player, coach, manager and is currently the Mullingar Shamrocks Children's Officer. Here she recalls some highlights of her remarkable career including her camogie playing days with Raharney and her LGF career with Rochfortbridge, Westmeath and her beloved Mullingar Shamrocks. And of course Lisa is still contributing as a player and long may she continue to do so ... A true Shamrocks great.

Coming from a family that is obsessed with G.A.A. it was always going to hard to avoid it, so it was either get involved or sit out looking on. I decided the only way was go get involved at some level. My earliest memories for the club was being brought to Springfield with my father and brother to pick stones off the back field, this was a big moment for the club to be developing the grounds and I remember my father telling us how lucky we were to be part of history. (I was unsure of that!)

Not long after this I was introduced to Saturday morning football and most importantly the bus trip, where we were collected and dropped back by Mick Price. At this early stage, it looked like football was not going to be my thing, a lack of interest due to very few girls playing, but the Millmount Ave crew, where you played football on the road or you didn’t play anything, kept me ticking over.

Then school football in Presentation Convent arrived and under the guidance of Mr. Niall Brennan I started to really enjoy playing football even though the medals did not come, This is where I got my first 10 minutes of Croke Park football, at half-time between Laois and Westmeath (I believe my mother shed a few tears that day, not sure if it was over Laois or just that one of us got to play in Croker, she did not hold out much hope for us). It was this school team that started to build Shamrocks next generation of Ladies footballers, with a number of players from Presentation joining Shamrocks and with some key girls from St. Colman’s we went about starting out on our winning ways. We won the u-14 shield in 1997 after which both myself and Tanya Farrell were asked to start training with Westmeath Ladies. My parents agreed to let me go and a lift was arranged for me and so my county days started under the new manager Marie Crotty from Waterford (Marie had vast experience from playing with Waterford and plenty of accolades to back herself up)

The step up to senior training was a major shock to the system, no more kicking the ball and having the craic but plenty of endurance running and plenty of skills work which I badly needed. I knew it was always going to be very hard to make this Westmeath team and would need every bit of help available. I was advised that to improve my county game I needed to be playing senior at club level and as Shamrocks did not have a senior team I could then play senior with another club and play underage with my own club. This started my three year career with Rochfortbridge where we were very lucky to win 3 seniors, a Leinster and an All-Ireland sevens. It was always such a pity to have not pushed on and won a Leinster, as there was serious talent in this team of Eileen Gill, Carmel Harris, Monica Jordan, Claire Corcoran and Ann Marie Curran to name just a few. During the 1998 league campaign we got our chance as a county to play in Croker, an experience I will never forget and was very lucky to squeeze a spot in beside an excellent Jo Giles at corner forward. I remember being asked at that time what club would they put me down for the programme and it was an answer I did not have to think about,although I really enjoyed my football in Rochfortbridge I only had one club in my mind and that was “Shamrocks”.

As the years ticked by Mullingar Shamrocks as a club continued to thrive and we won u-16, minor, junior titles before getting stuck in intermediate for a number of years. During a night out in 2007 with Pamela and Sandra Greville a bet was made that they would come and play for Shamrocks and in exchange Carole Finch and myself would play camogie for Raharney. A rookie mistake was made by our then manager Luke Dempsey when he placed Pam in goals for a training session and we never saw her after that but Sandra hung around for a few years until Killucan set up a team. To be fair we probably got the better deal and I won 5 senior championships and a few Leinster leagues with Raharney and improved my camogie skills a wee bit along the way!!We eventually made the break through with Shamrocks in 2009 to win a much needed Intermediate title and to this day it was the best medal I have got. There is just nothing better that getting that medal; you had work so hard for it and to win it with a group of girls that you had grown up with, there is nothing to beat that. Over the next number of years, we kept our heads just above water to stay senior.

Club, county and myself struggled through some tough years with losing my dad in 2010 and not being recalled to the county panel the following year. I considered that my time had come to hang up the boots. Westmeath ladies went on to win the intermediate All-Ireland final in 2011 and I was so delighted to see the county finally get some recognition and to see some of the long time stalwarts of Carole Finch, Laura Walsh, Triona Durkan, Aileen Martin, Johanna Maher, Jenny Rogers, Fiona Claffey and Laura Newman climb the steps of Croker and bring Westmeath ladies back into senior grade where we belonged!! For me during this period it was back to holding onto playing senior club, girls like Emma Morris, Karen n Sophie Hegarty, Lou Begley, Áine Melody, Tara Fagan Linda Gilmartin and Carole Finch kept me continuing to make the trip to the Shamrocks, the weekly bit of sneering and the odd clap on the back got me back on track. The following year we played some excellent football and started to win a few games and before we knew it we were in a senior semi-final which we narrowly lost to Kinnegad.

The following year Niall Williams alongside the two Paul’s guided us back into a senior final, the first ever for our club. Unfortunately it was not to be our day but after few tears and hours of talking it over we lifted our heads and enjoyed a great night out. This group of girls have been through many challenges but I can hand on heart say they are a wonderful group of women, that show unreal interest and respect for their club. We are very lucky to have such a bright future in Shamrocks and I have been extremely lucky to have been coached so well by all my managers across my years in Shamrocks.

I can’t write this article and not mention two important people who really got the Mullingar Shamrocks ladies team started, the first being the great Detty Cornally who was instrumental in setting up ladies football in Shamrocks and we owe her so much thanks for all she has done for the women of our club. I don’t know where she found the time but she did and along the way she turned the great Terry O' Dowd to the women’s side also. The Shamrocks ladies will be forever grateful to Terry because if he is not down shouting at you at training, or giving you those helpful tips on what you done wrong in a game (in a nice way of coarse), he is opening pitches or sitting at a county board meeting fighting for something for us and believe me after being at a few meetings with him I am glad he is on our side. Without these great people and many more our club wouldn’t be where we are today.

So as covid19 begins to ease its back we go on and as Michael Ryan said “come with a dream, train like an athlete and leave like a role model”.