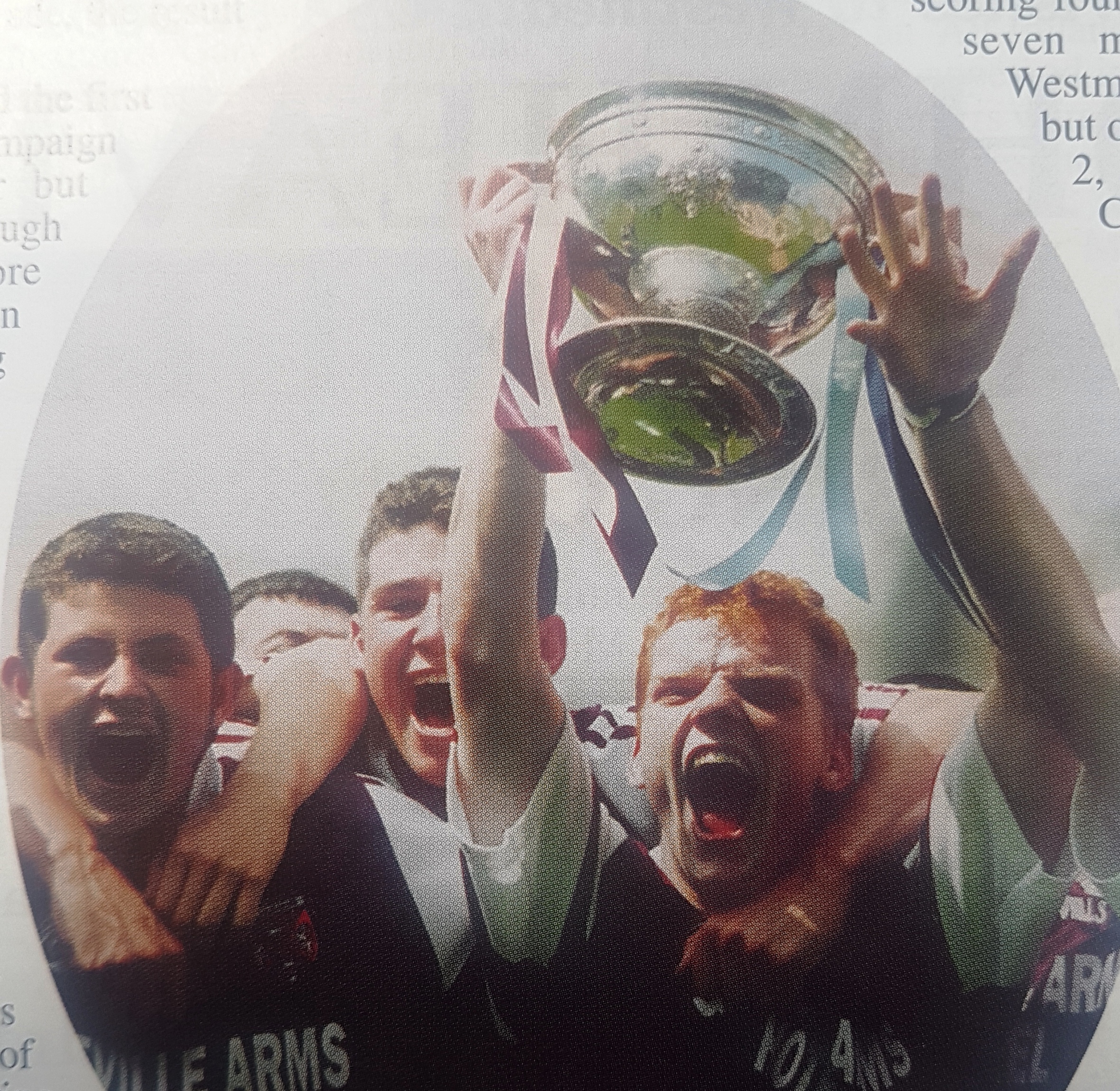 'We had preposterous confidence really ..'

Alan Lambden captained Westmeath to victory to the 2000 Leinster Minor Final. Dublin were defeated in the Leinster final. Westmeath were defeated by a Mayo team that was 'sprinkled with stardust already' in a replayed All-Ireland semi-final. The following evening Mullingar Shamrocks defeated Moate All-Whites in a winner-take-all senior championship tie. Alan was magnificent in that match. In his role as an extra defender he totally neutralised the threat from Moate's great forward, Ger Heavin. Alan was also superb in our 2004 championship playing the sweeper role. In 2005 he made his senior debut for Westmeath.

Alan left Mullingar in 2006 to take up a full time job opportunity in the Western Australia desert on an Iron Ore mine as a junior geologist and worked there for two years before moving to Vancouver, Canada to work in the Yukon Territory on an exploration gold camp where access was only by helicopter. In 2010, Alan worked in Northern Ontario in the Canadian deep freeze for three years on an underground gold mine. Alan is now based in Toronto, Ontario and (pre-lockdown) flew to Brazil a couple of times a year to spend about a month in the rainforest developing a gold project to the next stage.

In this superb piece Alan recalls the Leinster campaign and the many reasons why it all happened ...

The Summer of 2000 will always seem to be sunnier than other Summers in my head. What happened that July was the pinnacle of a whole season’s work we had put in all Winter. The intangible thing about that Westmeath 2000 minor team, was the incredible team spirit. If ever there was a team that justified the saying “greater than the sum of its parts”, it was that team. We had preposterous confidence really, that any new Westmeath fan today would be surprised to hear. It was undoubtedly due to the incredibly successful recent run of trophies the Westmeath underage teams had picked up in the years prior to that Summer. The pioneering Westmeath minor team during the magnificent Summer of ’95 winning an almost unthinkable All-Ireland, with Shamrock’s Davy Walls a member. I heard stories of Luke Dempsey’s team talks early in that season of 1995 proclaiming that they could win a Leinster only to prompt a round of behind-the-glove snickers from some of the players. The Under-21’s of 1999, with Shamrock’s Michael Burke and my older brother Brian, winning the All-Ireland against a stacked Kerry team containing numerous players who went on to win multiple senior All-Ireland medals and several future GAA Player of the Year awards.

It shouldn’t be underestimated what Luke Dempsey did for young players in Westmeath, not just the teams he directly coached but every single Westmeath club and county team around at the time. The Under-21’s winning Leinster and beating a fancied Meath team in Tullamore in front of 12,000 people a couple of months earlier made us think why couldn’t we win a trophy, we’re Westmeath, we win trophies all the time. The grass is shorter if someone else has traversed the land before you.

Our season began with a meeting in the Greville Arms sometime that Winter to discuss the season ahead. Many players at the meeting had already done some things on the county stage to make you sit up and take notice. PJ Ward and my Shamrock’s club-mate Dónal O’Donoghue had been selected to play on the Ireland under-17 team that took on an Australian compromise team sent over for some exhibition games. The Under-16 Westmeath team the year before in 1999 had won the Fr Manning Cup and the Gerry O’Reilly tournament, the plum trophies for that age grade in Leinster, apparently going two years unbeaten in all competitions. Westmeath had also won the Vocational All-Ireland B championship that year with James Martin starring and was the reason, I found out later, that I was chosen as captain due to some of the management attending a couple of our games. That team also included Brendan Murtagh who would go on to play a key role with the Westmeath hurlers for many years and Johnny Dunning who would play full-forward for Roscommon with distinction during the 2000’s. Padraig Leavy played with the aforementioned Under-21 All-Ireland team, having an All-Ireland medal in the bag at the age of 17. He was already familiar with what needed to be done.

The squad was managed by Ambrose McGowan that year. Ambrose had coached us at under-14 so knew a lot of us already. He appointed the perfect number two, the one who you can talk to like a mate in Eugene Dolan. Eugene was huge craic and the link between the players and the manager, he knew his stuff too. Mícheál Ó Phléamoinn our fitness guru, at times ran the bollix out of us, including twelve km runs that I regularly tapped out of early. I remember, he would urge everyone to shout encouragement at training like lunatics, which in a way helped bond the team. Ger Deegan, our physio, was a very nice and approachable guy who I always felt his door was open for a chat about whatever was going on. Always up for a yarn in the physio room with physio-table-regulars like Timmy Hill getting treated for the latest injury even though he hadn’t kicked a ball in months. Ambrose was the first coach I had that introduced video analysis. That’s right, Ambrose was doing video analysis before it was cool. I recall one session when we were sitting around watching a replay of the drawn Laois game. Ambrose was never afraid to tell you to buck yourself up but he also knew when to strum a complimentary chord. One particular freeze-frame moment stands out in that match where Laois had fought back to score an equaliser in the dying moments only to launch another attack. We were caught napping and left for dead. The Laois corner forward won the ball in amongst all of us and turned to kick over the winning point … only for our corner back, Finian Newman, to appear out of nowhere and pull off one of the finest blocks you’ll ever see, anywhere, in any game. It’s at this moment Ambrose paused the video and points out that, this moment right here, is when our season ends. Pack up your bags and go back playing with your clubs because this part of your season is over. The room fell silent as we digested what he said and what could have very nearly happened. We trounced Laois the next day, setting up the final against the Dubs.

If anyone was the face of the team it would have been P J Ward. P J had a swagger I had never seen before and probably the first player I’d come across to sport white boots. He had after all, just been called up to the Irish team. After banging in a winning goal against the Dubs in the Leinster final in Croke Park, what does he do? Go and thank the teammate who passed it to him? No way. He goes straight up to Hill-16 celebrating by jumping onto that metal partition they have at the foot of the Hill. Then he proceeds to do that Hulk Hogan thing of cupping his ear “I can’t hear you now!” The cockiness! Brilliant. It caused a bit of controversy at the time amongst some of the more sensitive Westmeath officials. I remember Ambrose calling me to discuss whether he had given the finger to the crowd. I, of course, assured him he hadn’t. There must have been at least 20,000 people by the time our game had finished, with the Hill filling up to watch the following senior Kildare v Dublin final. The Dublin crowd always love a scallywag and they certainly appreciated him that day, I think they actually cheered him.

I don’t remember much of the game. I was rubbish. Keeping tabs on the Dub’s centre-forward was my main duty. Padraig Leavy kicked two absolute whoppers from midfield. Our subs that day were incredible. Completely turned the game for us after we had gone a man down. Dónal O’Donoghue, probably the cleanest, most technical defender in Westmeath, had a rare moment of fuzzy thinking and lashed out at a Dublin forward, getting a red card. It left us with a mountain to climb and we looked dead and buried. The coaches on the line tinkered with the forwards and brought on a couple of lads who were chomping at the bit, a move that completely turned the game upside down. Four or five points down, down to 14 men, 15 minutes left then fellas started gracing the ball over from all angles! Our tails were up and we went full ballistic mode attacking the Dubs. Tom Brown buried one into the bottom corner. P J hopped a rocket off the top corner stanchion. I was particularly pleased for Kinnegad’s Gordon McDonnell who was visibly upset when not being named on the team for the final, to come on and show huge character by scoring a glorious outside-of-the-foot winning point. For those last 15 minutes we could do no wrong. Finian doing his best impression of Damian Phelan five years earlier with a man-of-the-match performance, he was everywhere.

We went mental at the end. Everyone was singing and dancing in the dressing room, except for Dónal who got dragged away by the ear by Richie, “You, you’re coming home with me”. I can remember Des Cahill on the radio the next morning quite rightly taking the mickey out of me for my speech: “Does anyone have any idea what the Westmeath captain said?”. Seamus Whelan had written the Irish bit of the speech for me on a piece of paper and it was tucked into my sock for the entire game. The ink had ran making it illegible and I still mumbled as one long word. What was I meant to do? Suddenly become fluent in Irish with Nidgey Adamson jumping all over me and I trying to talk into a microphone in front of several thousand people.

The Mayo team we came up against in the All-Ireland semi was sprinkled with stardust already. Future All-Star’s Conor Mortimer and Alan Dillon spearheaded their attack and would go on to play a couple of All-Ireland finals with a very good Mayo side during the 2000s. We left it behind us that day against them in Croke Park. Should have beaten them. They did to us what we did to Dublin. That’s the biggest regret, drawing the first game, not losing the replay.

Twenty years ago this Summer. My God, what a brilliant time. Great memories and the best craic with a once-off band of teammates. Thanks to Ambrose, Eugene, Mícheál and Ger for steering the ship that Summer. What a great, balanced team of coaches. Looking back almost half a lifetime ago, it’s a nice feeling to have been part of a select group of underage Westmeath players who happened to be around during what could arguably be called Westmeath’s Golden Age. I even recall my GAA mad Dad having a tongue-in-cheek moan about going all the way to Croke Park again for the fourth time that Summer!

A big thanks to all the Shamrock’s coaches who played a big part in my development as a player. When you are young you don’t realise what a huge commitment they make. I tip the cap to all of you.