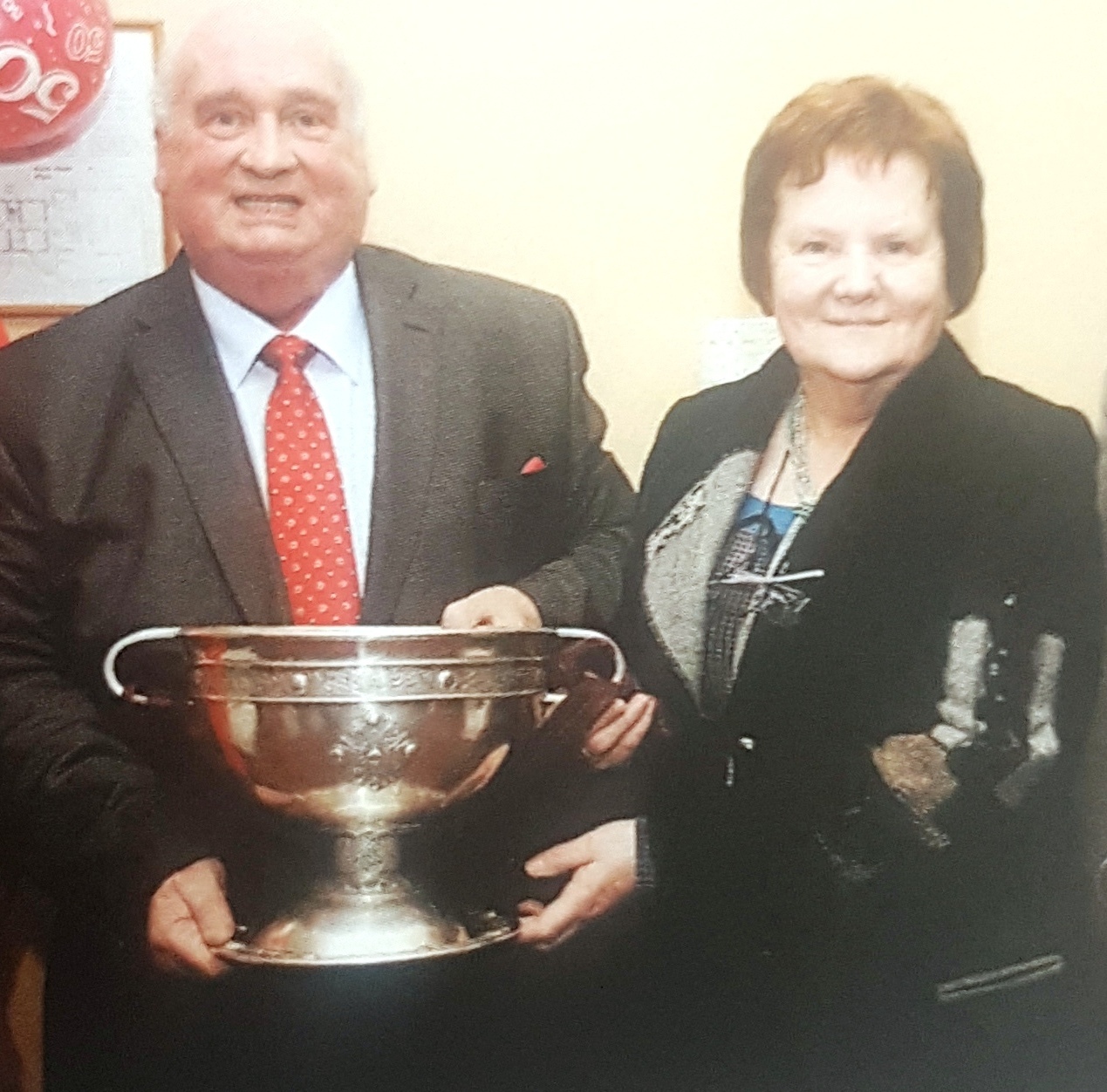 The Mullingar Shamrocks community is in mourning this weekend following the death of Frankie Connaughton in Beaumont Hospital after a long illness. Frankie was one of the key players who helped establish Mullingar Shamrocks as one of the great clubs in Westmeath. The Shamrocks club and executive offers its deepest sympathy to Frankie's wife Marie, his son Frank junior, his daughter Rosemary, to his brothers Colm and Cyrian and to his sisters Madie and Marian.

Frankie Connaughton was one of a number of players from St Brigid's Terrace who provided the backbone of the Mullingar Shamrocks team that made the transition from junior to senior ranks in the early 1960s. Others from the area included Frankie's brother Colm, the Nolan brothers Seán (who became one of Shamrocks' great administrators) and Davy as well as Hubert and Seán Magee. As young lads they played hurling and football morning, noon and night and became superb dual players with an uncanny understanding of each other's play. Their skills were further honed in the street leagues that were so popular at the time with the St Brigid's Terrace teams excelling.

Frankie Connaughton was one of those outstanding dual players and when Mullingar Shamrocks played their first match in Springfield against Cullion Frankie had the distinction of scoring the first goal at the venue. At seventeen-years-of-age Frankie was right half back on the Shamrocks team that won the 1962 junior football title. A year later he became the first Mullingar Shamrocks player to captain a Westmeath Leinster title winning team as the county minor footballers won their third provincial minor title. Frankie was Westmeath’s top scorer contributing 4-13 in the course of the 1963 campaign. Frankie had the confidence and skill set to master the key positions and was centre-half forward in the Leinster final and scored 1-3 as Westmeath defeated Dublin by four points. Down were defeated in the semi-final before Kerry got the better of Westmeath in the All-Ireland final.

In 1964 Mullingar Shamrocks won the senior football title for the first time and Frankie held down the key centre-back position with Kevin Higgins and Davy Nolan on the wings. Two weeks later Frankie Connaughton and Kevin Higgins were members of the Westmeath senior football team that won the O'Byrne Cup defeating Carlow in the final. Kevin Higgins was goalkeeper on that occasion and Frankie was corner-forward. In 1966 when Shamrocks won the senior title for the second time Frankie, Kevin Higgins and Davy Nolan again formed the half-back line. This was in an era where it was believed that a strong halfback line formed the foundation of a great team.

Frankie Connaughton was a panellist when Pearse's won the senior hurling championship in 1962 and played in two losing finals with Pearse's in 1966 and 1967. Overseas work commitments interrupted Frankie's career in the late 1960s. Frankie went to Brazil in 1967 and played no football or hurling that year. He then spent some time working in Holland with his brother Colm. 'We used to fly home every three weeks to play the football and hurling. The fare was £33 at the time. We'd pay half and the club would pay the other half' Frankie told Maroon & White- Westmeath GAA Annual (2013). Despite the interruptions Frankie played for Shamrocks into the late 1970s and was a regular on the Westmeath football team from 1969 to 1972 and banged in the goals with amazing regularity including two against Dublin, 2-4 against Leitrim, 2-2 against Donegal, one against Cavan, Armagh, Louth and Tyrone and three more against Donegal. The repertoire included a famous back heeled effort.

Frankie moved to Arklow, the hometown of his wife Marie in the early 1980s. He closed his fancy goods shop in Pearse Street which was located where Specsavers/Fagan's is today. Frankie and Marie and their family later moved to Gorey in Wexford and for the past number of years resided in Swords, County Dublin.

'Even though I've been living in Gorey for the past 30 years. I will be a Westmeath and Mullingar Shamrocks man till the day I die. I always look out for the results' Frankie told Maroon & White.

The Mullingar Shamrocks and Westmeath jerseys will rest on Frankie's coffin during his funeral ceremony.

Something for the coaches starting tomorrow (Thursday) ev...

Statement from GAA and GPA on Coronavirus

Statement from GAA and GPA ... The GAA's Medical, Scie...

Statement from Westmeath CCC on championship ...

A chairde;In the context of the Coronavirus outbreak, t...