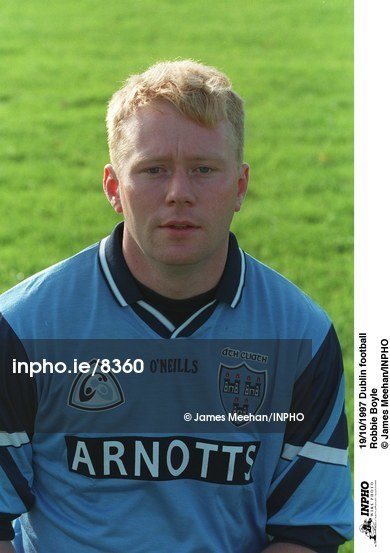 Robbie Boyle, a highly qualified coach, has been appointed as the club's intermediate LGF team manager for the coming season. Robbie has been centrally involved in Mullingar Shamrocks for a number of years and is the club's schools' coaching officer. Robbie takes over from Ciarán McKenna and Spike Fagan who have retired after three years of wonderful service. We thank Ciarán and Spike for the brilliant commitment they brought to the post.

Robbie won an All-Ireland senior football medal in 1995 when he was a member of the Dublin team that beat Tyrone 1-10 to 0-12 in a final that is memorable for many reasons. Robbie replaced Mick Galvin in the second half. This was the final in which Charlie Redmond was sent-off by referee Paddy Russell and continued to play on for over two minutes before Russell delivered the message for a second time. Peter Canavan gave an exhibition of kicking scoring 0-11 of Tyrone's 0-12 points before providing the pass for Sean McLaughlin's 'equalising' point only for Russell to disallow the point judging that Canavan had picked the ball off the ground.

It's hard now to believe that this was Dublin's first All-Ireland victory since the 12 Apostles won in 1983 and that Dublin didn't win again until 2011 with Stephen Cluxton's famous free kick.

It was a Dublin team of many future managers including some fellow called Jim Gavin, Pat Gilroy (also a second half replacement), Dessie Farrell, Paul Bealin who guided Westmeath out of Division 1 of the NFL and to twelve successive defeats before he was relieved of his duties, Paul Clarke, Paul Curran, Jason Sherlock and many more.

We wish Robbie the best of luck in the year ahead.