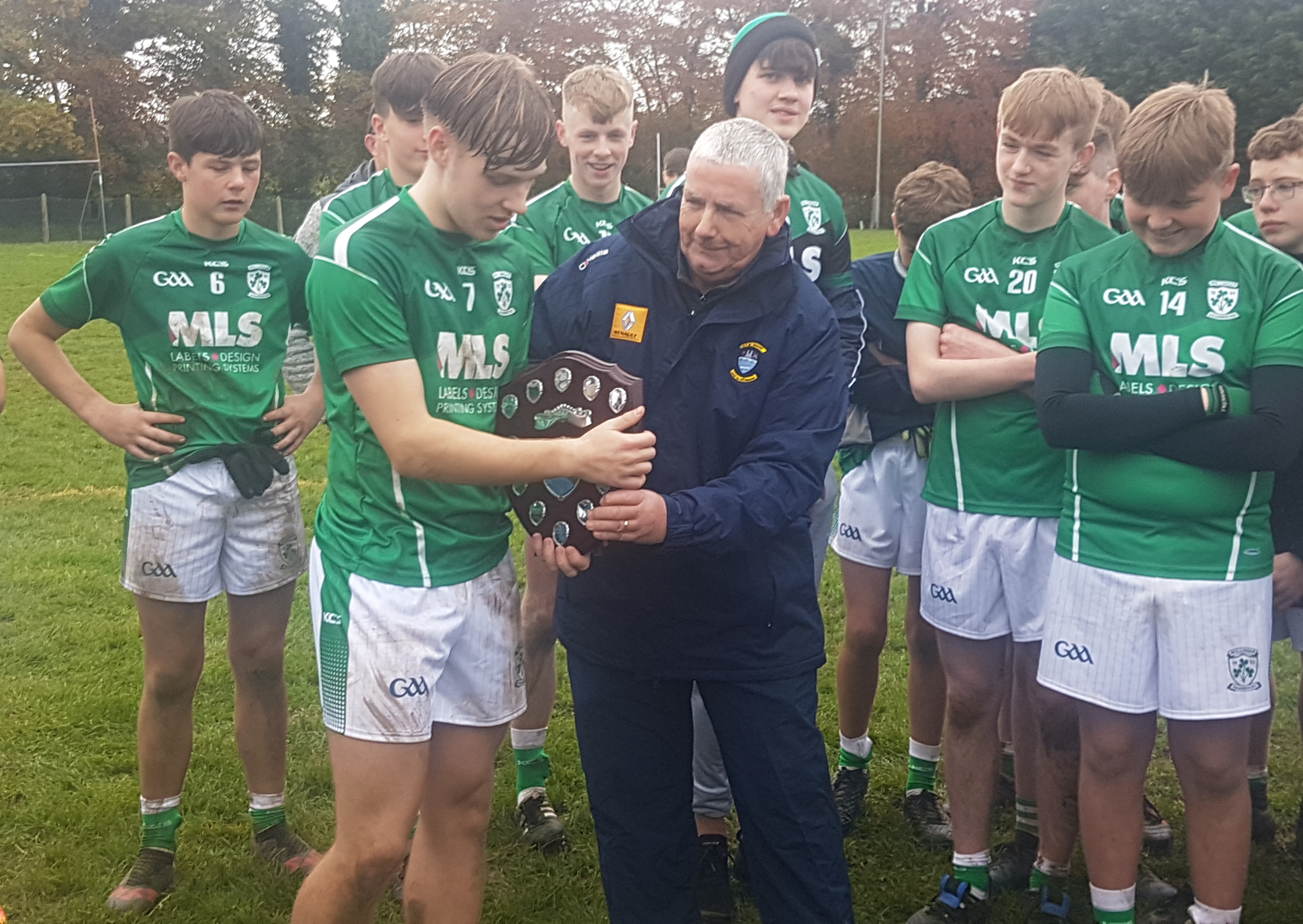 A great win by our Under-16s to capture the county title and bring the season to a successful conclusion. It looked doubtful in the early stages as the boys were slow to settle but eventually they came to terms with the opposition and the occasion and in the end were deserving five point winners with St Joseph's dangerous to the end as they chased down the vital goal.

St Joseph's goaled directly from the throw-in when Dylan McDonnell crashed the ball to the net after Alan Conlon raced through the Shamrocks defence. In the eight minute, Alan Conlon scored St Joseph's second goal as the Shamrocks defence was in serious trouble. Ben White pointed for Shamrocks and a great goal scoring opportunity created by a superb Ollie McNamara pass ended with Shane Ormsby crashing the ball off the post. The miss was a severe blow at the time and St Joseph's added two more points courtesy of Mikey Lynam (a great long range effort) and Ben McDonnell to emphasise their dominance. The scoreboard read 2-3 to 0-1 after fifteen minutes. A repeat result of the clubs' earlier meeting looked to be on the cards when St Joseph's were 5-15 to 1-12 winners.

At this stage the Shamrocks recovery began and the defence began to close down the St Joseph's attack. Shane Ormsby and Ollie McNamara worked hard to create a scoring opportunity and when the latter was fouled a penalty was the result. McNamara slotted the goal with the calmness of a class forward and then Ollie added two vital points from play. The first came after some great work by Daragh Hughes and the second from a gallop from midfield by Tomass Turks. Ollie then stamped his attacking authority on the match when he scored his second goal. In the smallest of spaces, he sold multiple dummies to create the room to shoot for goal. Steven Fennessy saved well but Ollie reacted brilliantly to volley the rebound to the net for a brilliant and spectacular goal and one worthy of winning any final. Mullingar Shamrocks goal of the year without question. It was also the score that drew the sides level. Mikey Lynam scored a fine long range point to send St Joseph's ahead again. It was to be for the last time as Shane Ormsby (0-2) and Ollie McNamara from a free (a great effort from close to the side line at the 'wrong' side for a right footed kicker) added points to send Shamrocks into an interval lead of 2-6 to 2-4 that seemed impossible fifteen minutes earlier.

Shamrocks continued to dominate on the restart and Ollie McNamara added two more points. Tomass Turks did all the good work for the first and the second was a great team score that began deep in defence. Ben White worked hard and was rewarded with his second point. Perseverance by Daragh Hughes and Ollie McNamara ended with a foul on the latter and Ollie popped the free over. Alan Conlon pointed for St Joseph's; a great Steven Fennessy save deprived Daragh Hughes of a goal but in the play that followed Ollie McNamara collected a blasted the ball to the net for his third goal before he quickly added a point to his tally to make the score Mullingar Shamrocks 3-12 St Joseph's 2-5 after forty minutes. In twenty-five minutes of great football Shamrocks had outscored St Joseph's by 3-11 to 0-2.

However, St Joseph's were far from finished and staged a fine comeback and outscored Shamrocks 0-6 to 0-1 in the final ten minutes and came perilously close to scoring the goal that was essential to push the comeback into nervous territory (Alex Ferguson had another name it). Mikey Lynam scored (0-3), Dylan McDonnell (0-1) and Joseph Cusack (0-2) during this resurgence. In between, the hard working Ben White scored his third point of the day and the woodwork deprived Daragh Hughes of a goal. And Ollie McNamara was wide from a free; 'He's human' the man from St Joseph's said.

So a great end-result for Mullingar Shamrocks and a reward for the players and management who worked hard all year and improved with each outing. Mikey McDonagh had a few good saves to his credit and his restarts were excellent. Rian Adamson and William O'Reilly anchored the defence and were well supported by Ciarán Kiernan, Conor Kelly and Cian McGrath. The manner in which the defenders came to terms with the St Joseph's attack after an initial shredding was critical to the win. Midfielders Ben White and team captain Tomass Turks worked hard all through and in attack the power of Daragh Hughes, the work rate, mobility and skill of Shane Ormsby as well as good work by Conor Fagan and Aaron Russell made victory possible. Daithí Martin also made his presence felt when he was introduced in the second half. AND then there was the Man of the Match, Ollie McNamara. His total of 3-8 today speaks for itself. It is even better than the 1-14 he notched against Inny Shamrocks as it took Ollie, 80 minutes to notch that total.

It’s fair to say that this group of players lost their fair share of matches at the various age levels up to this year. The tremendous work of team manager Anthony Clinton, his assistant Vinnie Timoney, fitness coach Seamus Wallace and Paul Christie certainly has paid dividends all year with results steadily improving and good numbers at training. This culminated in Tomas Turks being presented with the trophy by a very proud Pat Collins after the game.