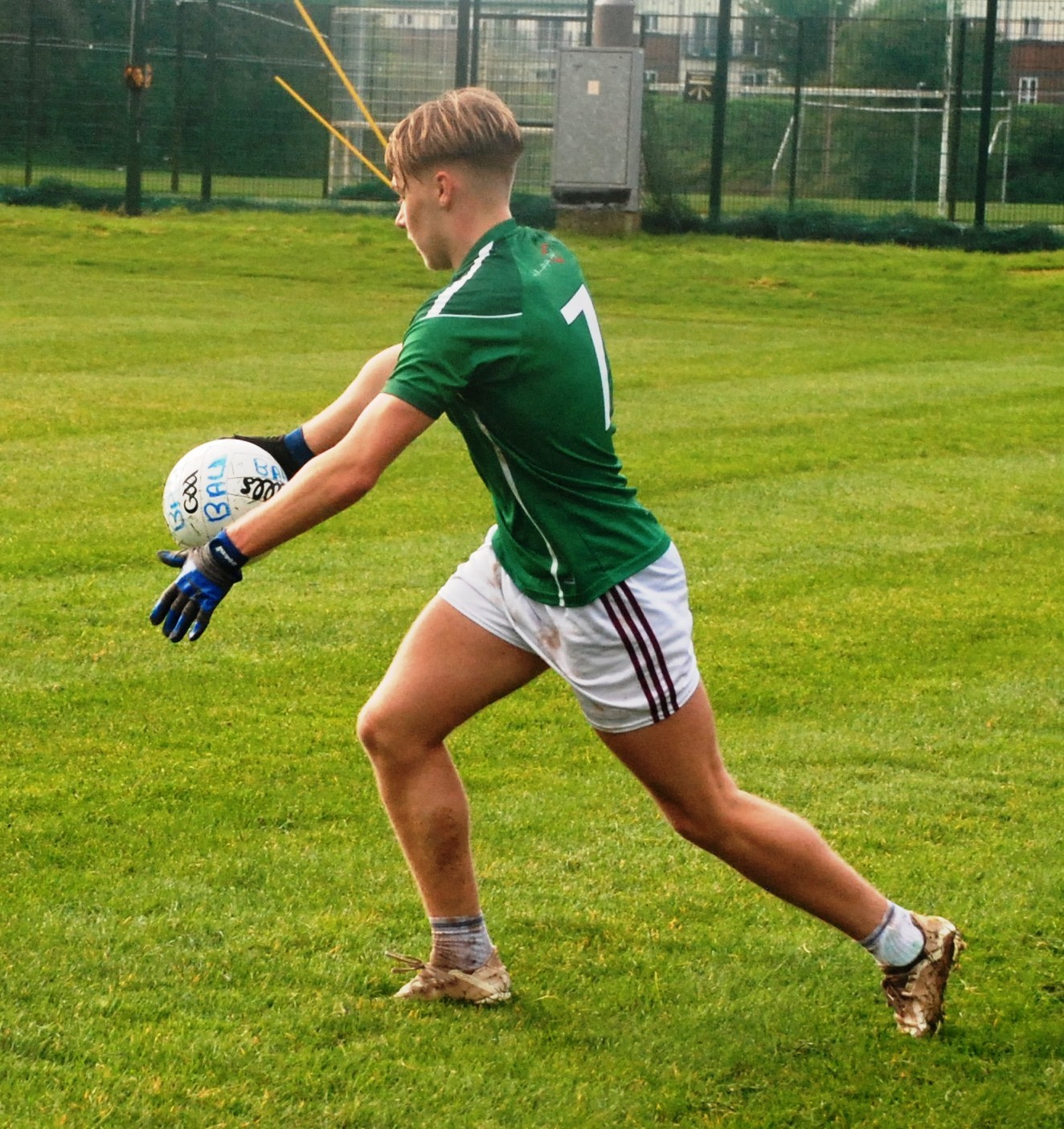 No question about it this was the match of the year played at the Springfield venue. A great game of football that featured great defending, some fine scores, outstanding individual displays, oscillating leads with both teams apparently down and out at different stages only for the sides to finish tied at the end of the sixty minutes before Shamrocks got away from the Inny version of the brand in extra time. And the match was excellently refereed by Mick McAdden (Seán Sheridan please note).

Tomass Turks and Ben White opened the scoring for Mullingar with a point each before the outstanding Seán McKeown equalised with two fine efforts. Oliver McNamara kicked a long range point from play and followed this with a quickly taken free that created an opening for Ben White who soloed through and netted. Mikey McDonagh got his fingertips to a Seán McKeown bullet and deflected the ball over the crossbar, a vital save as it transpired as shortly afterwards Callum Maher dummied his way through the Mullingar defence and planted the ball in the net for the equalising goal (1-3 each). McKeown and Oliver McNamara exchanged points from frees before Tomass Turks pointed for a second time. Conor Fagan gained possession from the resultant restart and raced through the Inny defence for a great goal. A Seán McKeown pointed free narrowed the gap. Mikey McDonagh advanced smartly to foil another Inny attack after Seán McKeown hit a wonderful fifty-yard pass to split the Shamrocks defence, a defence that was superbly led by Conor Kelly at fullback. Two Oliver McNamara points secured an interval lead of 2-7 to 1-5 for Mullingar Shamrocks.

Oliver McNamara pointed on resumption after some great work by Daithí Martin to extend Shamrocks lead to six points. Shortly afterwards Mullingar's goal had a charmed escape after McKeown miss-kicked in front of an open goal but shortly afterwards Mullingar Shamrocks returned the favour with a few minutes of scrappy forward play. Inny Rovers made maximum use of the let-off and a Luke Kearns goal followed by a Seán McKeown penalty goal levelled the match (2-8 to 3-5).Adam Boyle returned to the goal for the black carded Mikey McDonagh. Inny Rovers dominated at this stage and fine points from Jack Doran sent them into a two point lead (2-8 to 3-7) and the Mullingar Shamrocks had been outscored 2-2 to 0-1 after the restart. A Conor Fagan point steadied the ship but a Luke Kearns point neutralised this score. Another Seán McKeown point extended the Inny lead (2-9 to 3-9) with the final stages approaching. However Mullingar Shamrocks refused to surrender and an Ollie McNamara free provided a chink of light. McNamara pointed from play and from the kick-out Shane Ormsby fielded well and with a great pass provided Ollie McNamara with a goal scoring opportunity. Ollie crashed the ball to the net; Shane Ormsby again won possession from the restart and again found McNamara who pointed the Springfield Shamrocks into a three point lead. In five minutes of glorious play a three point deficit was converted into a three point lead. Inny Shamrocks staged one final rally and when Jack Doran's goal attempt from a free skidded well wide it looked all over. There was time for one more twist and Inny Shamrocks made maximum use of the dying seconds to snatch a critical equalising goal (3-12 to 4-9) and extra-time beckoned.

Mullingar Shamrocks attacked from the start in the first period of extra time and points from Ollie McNamara (0-3) and Conor Fagan secured a four point interval lead for the green and white brigade. Following the resumption Ollie McNamara, Luke McCabe (a second half substitute who made a big impact on the game), and Aaron Russell pointed and Jack Doran responded with a like score for Inny. There was still time for Ollie McNamara to score two more points (and bring his total for the morning to 1-14) and for Rian Adamson (who had a superb game) to score one more before Mick McAdden blew the final whistle with Mullingar Shamrocks leading 3-22 to 4-10.

Shamrocks had qualified for the county final with what was a great team performance; one thing is certain this was this team's finest 80 minutes of football and the improvement over the year is a joy to behold. And Anthony Clinton, Vinney Timoney, Seamus Wallace and Paul Christie have been rewarded for all their hard work with the team since last February.