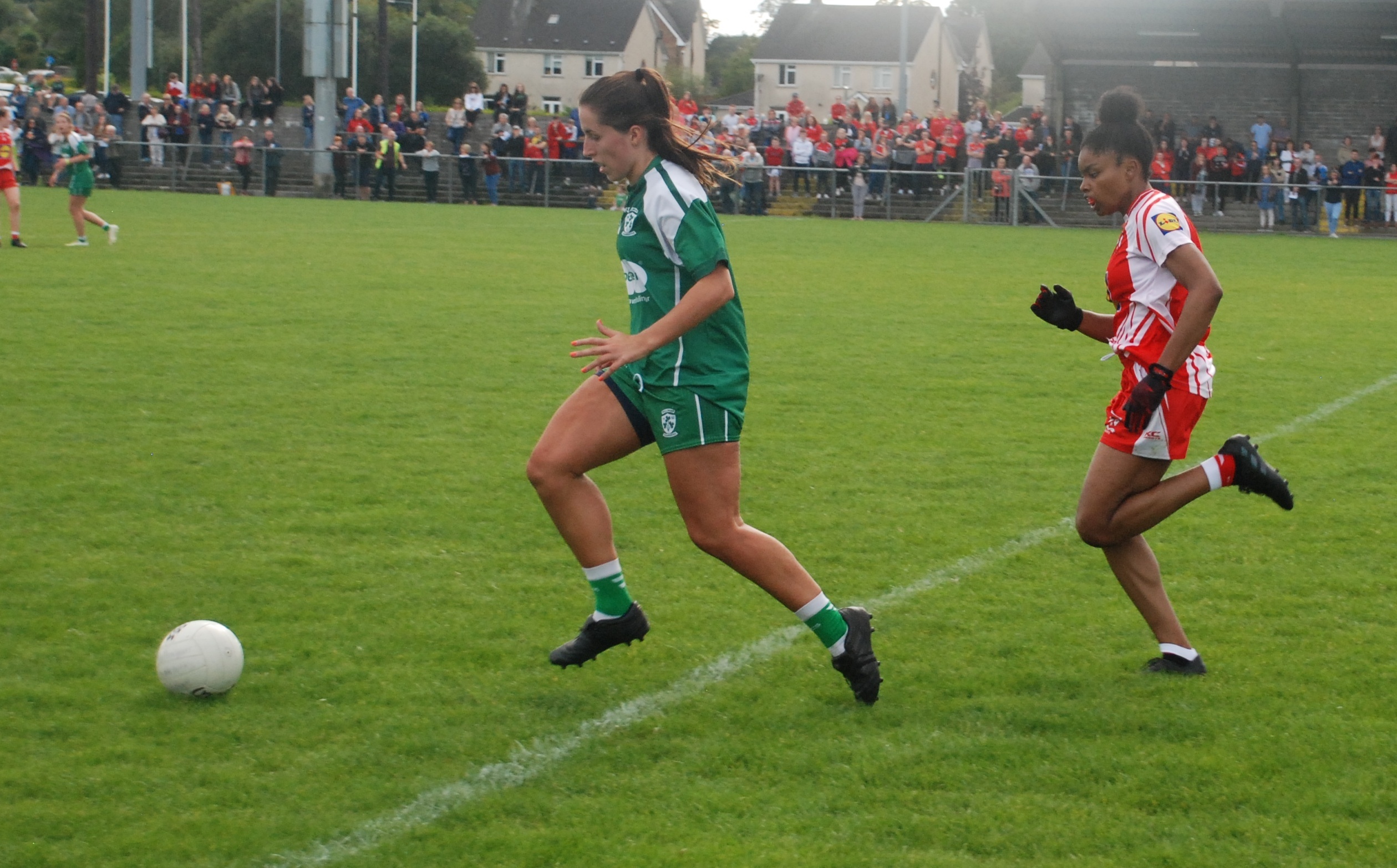 In the end it wasn't to be as Mullingar Shamrocks brave bid to snatch victory from the joys of defeat ran out of time. The Shamrocks girls battled bravely to the end but on the day Coralstown-Kinnegad were the better team and dominated the play for large periods of the game especially in the first half. Mullingar Shamrocks never played to their capabilities in the first half but this was largely due to the pressure exerted by the Coralstown-Kinnegad players. Just three points separated the teams at the interval and the wind assisted Kinnegad players had reason to be unhappy with their return as the narrow lead was not a fair reflection of their dominance. Shannon Lyons, one of the stars of the day, opened the scoring for Kinnegad but the Shamrocks response was immediate as Carole Finch, one of Shamrocks outstanding players on the day, collected a long delivery from Karen Hegarty and blasted the ball past the Kinnegad goalkeeper. Shannon Lyons pointed three frees in succession, Maud-Annie Foley added a neat left footed point from play; Lyons was then involved in a quick interchange with Sinead Murtagh that created a goal scoring opportunity for the latter, who shot to the Shamrocks net (1-5 to 1-0), Shamrocks responded immediately and Michelle Buckley collected from Lauren McCormack's restart and delivered long to Karen Hegarty who shot to the net. Just before the interval Shannon Lyons pointed her fourth free of the afternoon to secure an unflattering interval lead of 1-6 to 2-0 for her team. Coralstown-Kinnegad began the second half with two points courtesy of Maud-Annie Foley and Sinead Murtagh to extend their lead to five points. When all seemed lost the Mullingar Shamrocks produced their best football of the afternoon. Anna Jones did what great players do when the chips are down. She collected a long pass from Chloe Swarbrigg, soloed and sidestepped a bit and then unleashed an unstoppable shot past Jenny Doyle in the Kinnegad goal. Someone remarked that even Peter Schmeichel himself wouldn't have saved the shot. He probably wouldn't have done so. It was the score of the day and Shamrocks dominated for ten minutes or so with the youthful Máiread Newman very prominent in the revival. Karen Hegarty pointed from a free to reduce the deficit to the minimum (1-8 to 3-1) with just over ten minutes remaining. The play of Maud-Annie Foley was crucial at this time as she superbly created time and space for herself and almost always chose the correct option. It was a master class in bringing order to chaos. It was Kinnegad who got the crucial 'next' score courtesy of a long range free from Shannon Lyons but this was balanced by a Karen Hegarty point from play. Claire Taaffe had another vital point for Kinnegad. Shamrocks attacked but some judicious fouls ensured that the vital goal was not to be. Coralstown-Kinnegad , playing in their fifth successive intermediate county final, were deserving winners and it is tribute to the resilience and never-say-die attitude of the Mullingar Shamrocks players that they could have snatched victory in the final minutes. The team and panel worked extremely hard all season as did Ciarán, Spike, Daragh and team coordinator Geraldine. Their day will come.